(I was recently interviewed by a university student to help with her dissertation and I thought I’d share the text of her interview, minus the questions.)

It’s quite long, so feel free to read if at your own pace!

I’d always written when I was younger. I wrote comedy short stories and silly little bits which made me laugh, and I continued writing these into my adult years. I then went through a phase where I wanted to be a deeply serious literary author. By the time I got to my thirties, it was obvious that this wasn’t going to happen!

I did literature at both A Level and at university and the courses covered poetry but most of it noted me rigid. It’s probably better to read such things for pleasure rather than to write an essay. The only poet who appealed to me was Frank O’Hara, who I didn’t even see as a poet, as his work seemed to talk to me.

When I finished my postgraduate degree, I decided that I needed to see more culture. The only problem with this is that I live in Torbay, so really there wasn’t much around. I looked in the local paper and it said that there was a night of performance poetry at the Blue Walnut Café. I went along, and Byron Vincent was the headliner. The whole night inspired me to have a go myself. I asked the host and he gave me a slot for the next week. Which meant that I had to go home and write something.

I wrote a couple of comedy poems and the next month, the audience laughed at all the right places, and that’s when I thought, wow, this is what I want to do! 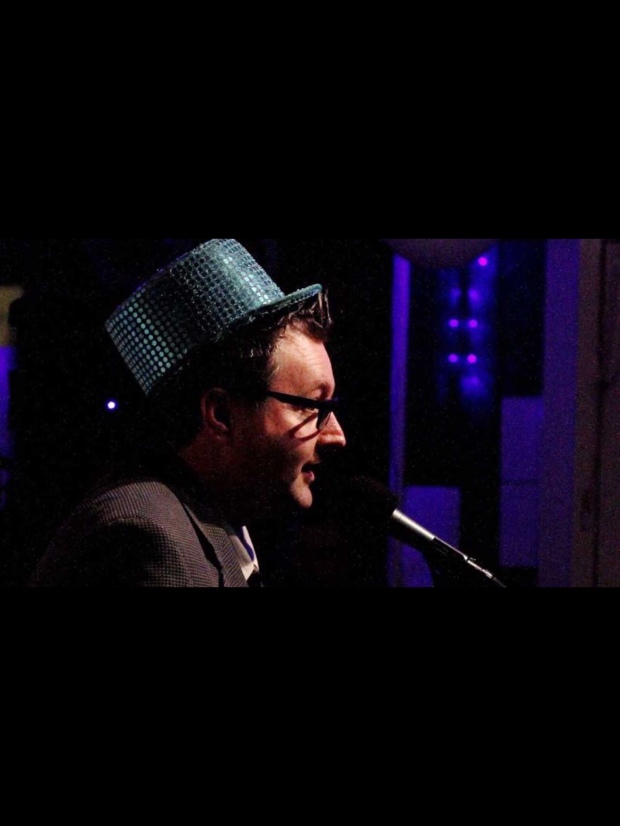 As a kid my only knowledge of poetry was Pam Ayres, who my mother loved and whose books were in our house, and John Hegley, who I had seen on television. I also liked the poetry of Robert Service, as I was obsessed with anything to do with the Yukon.

My father was in to music and comedy and by some kind of osmosis, I got in to them too at an early age. The wordplay associated with comedy and stand-up informed my writing, and when I started writing poetry, it was to music that I turned, to pop groups especially and their succinct use of language. Neal Tennant, David Byrne, Bob Dylan, Morrissey, Kirsty Maccoll, Kate Bush, Jerry Seinfeld, Alan Bennett, Bob Newhart, these were the people who introduced me to poetry.

My knowledge of the poetry scene has always been somewhat sketchy. Naturally at college and university we studied a good array of poets, but the canon was always a bizarre array of straight, white old men.

However, as a performer on the national spoken word scene, I find it to be dominated overwhelmingly by much younger poets. Spoken word is a relatively new art form with its basis in YouTube and Slam or battle rap culture. I go to poetry events around the Uk and find myself, at forty five, to be the oldest person in the room.

However I have also been to events where I am the youngest person in the room, particularly those aimed more at page poets. I am often booked at such events as some light relief!

I get up early and I try to do an hour of writing between seven and eight. This is just playing around with words and ideas. I have used the same cartridge pen for everything creative I’ve written since 1995, mostly because I write out everything Long hand. At nine o clock I might do some reading or research, which is just a flimsy pretext to watch comedy or listen to music. At ten o clock I will have a very specific writing session for a couple of hours, working on whatever my project is at the moment. At lunch time I might go to the gym and when I’m walking there, on the machine, or in the sauna or the pool, I’m trying to memorise poetry or my show. The afternoon is for more performance related playing around. This can be the most rewarding time. My hero is the performance artist Laurie Anderson and she suggests being loose, going in to a session with an idea of being creative and playing around with props, ideas, words, performance aspects. From four till six I will work on admin, emails, submissions, online forms, all that kind of stuff.

If I have a gig in the evening I get very nervous and I have to lie on the floor for a bit or shut myself off from the world. If I have to travel to the gig, I’ll listen to music, in particular, Pet Shop Boys, or Sparks. Something that matches the effect I want to have on the audience.

If I haven’t got a gig, then there will be another writing session in the evening, which lasts until around nine PM. 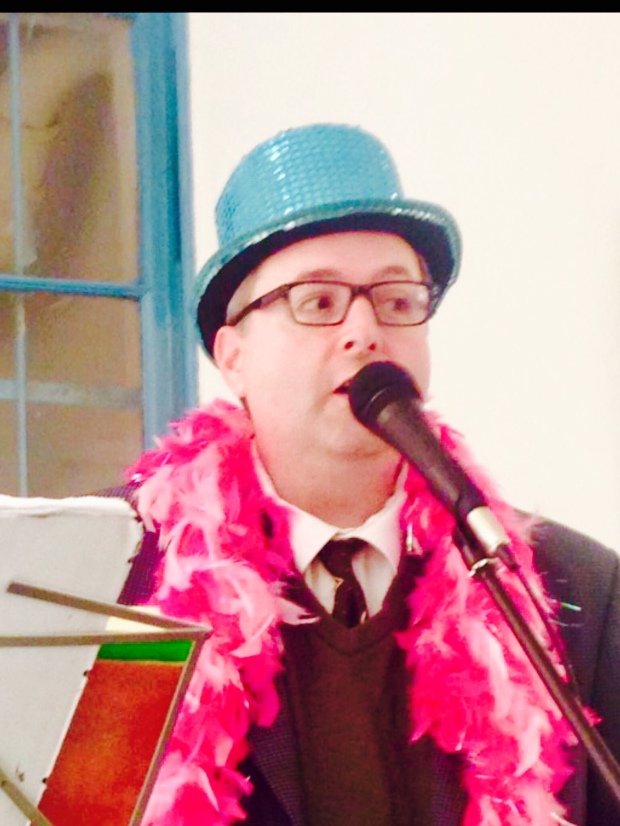 Even after all these years, I love writing. The feel of the pen in my hand, and having bits of paper scattered everywhere with snatches of poem on them, which I then have to somehow glue together, and the really good feeling when you make that connection. My biggest motivating factor I to write something which hopefully I will find funny.

The weather also plays a factor. There’s nothing better than a rainy, gloomy day, and sitting at my desk with the rain streaming down, a window open, and being in the middle of a really creative period. Time seems to stand still and the words flow smoothly.

It’s very rare that I have a day off from writing, rehearsing, performing or admin. I think my work ethic is mainly to know that I’ve done a good job, or as much as I could. I do have lazy days, though!

I would read absolutely anything when I was younger, from Jack London to Dickens, Douglas Adams, biographies of comedians or astronauts, non fiction books about Canadian history or motor racing. I am influenced today mostly by the comedy books, from cartoons such as Garfield, which gave me a wonderful sense of suburban ridiculousness from an early age, to Woody Allen, Les Dawson, Ivor Cutler and the aforementioned Pam Ayres. I didn’t care who wrote the book, so long as it was funny, and this has translated to my work today, the urge to use the wonderful tools language and it’s effects to make people have fun.

I love to read contemporary novels, particularly Haruki Murakami, Ali Smith, David Mitchell and Paul Auster. Recently I read Dan Rhodes’ book, Gold, and I thought it was so funny that I was rationing the number of pages I read a day so as to prolong the process! The writers I like are those that take you away from the present moment but always ground their fantasy in the normal, recognisable world. The Spanish writer, Juan Goytisolo, who passed away last year, wrote the most mind boggling humorous yet political novels which played with language and the form of the novel itself.

I read a lot of contemporary spoken word artists, such as John Hegley, naturally, but also Monkey Poet, Byron Vincent, Vanessa Kisuule, Dominic Berry. It just so happens that too of my best friends are also amazing contemporary poets, Samantha Boarer and Melanie Branton, and both have amazing books published in the last year.

Writing is a form of artistic expression. I believe that most people wish to express themselves in creative terms. My sister paints pictures and plays the flute, and my mother is a flower arranger who dabbles in ikebana. My dad used to paint, too, and my grandad was an inventor who would toil away in his workshop like some kind of comedy mad professor.

I can’t sing, dance or play an instrument, though I have tried all three. Writing and performing are the two things which bring me joy and, in a funny sort of way, help me to make some kind of sense of the world and the human condition.

The moment you pick up a pen and write something, then you’re a writer. There’s no ceremony or procedure. If you want to be a writer, then write.

My advice would be to keep writing and rehearsing, watch other poets, play around, be comfortable with your material, have fun as you’re rehearsing, try to be different, and most of all, write and perform to please yourself first and foremost. Don’t worry about what other people are doing, or what success it might seem they’re having, or what you think the audience might like. Just play your own game. And have fun. If you’re having fun while you’re performing, then the audience will have fun, too. And play around, and be loose.

I spent the majority of last year working on my first purpose written solo show, In the Glare of the Neon Yak, an hour long poem which I performed all over the Uk. I’m currently making a film of this with a film maker friend of mine, who is making his own interpretation of my work. At the same time, i am working with a jazz band to make a new stage version of the show, which is currently being written and will be rehearsed and finally performed probably towards the end of 2019.

My father passed away a couple of months ago, and I have written an hour long poem about his time working in the Australian outback, which I hope to perform just once, accompanied by a friend who is a violinist, it should be a good evening.

My new solo show for the festival and fringe circuit next year will be called Spout, and if is a set of poems and comedy material about the subject of tea.

On top of all this, as if I’m not busy enough, I’ve been working on two collections, one of serious pagey poetry, the other of upbeat comedy poems.