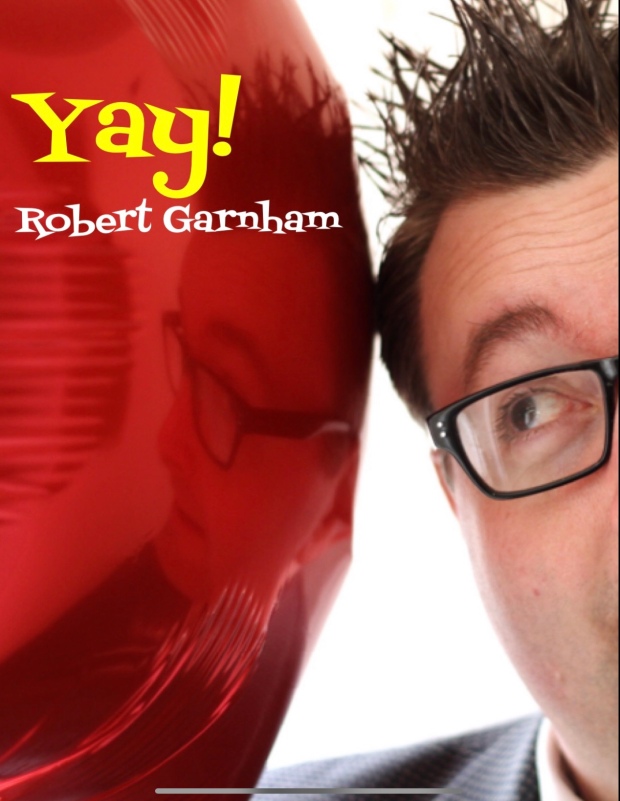 You know how it is when the summer comes, and you have an album which you play over and over, which seems to sum up a very particular time and place? In which each song seems to sing of life and the very joy of living it? Yay! Is a collection of upbeat poems for uncertain times, poems of imagination and escape, whimsy and warmth, humanity and honesty. From a man trapped in a toilet in a motorbike museum with a cistern which refuses to flush, to a small town in West Virginia in which absolutely everything has a suddenly erotic undertone, via Scratch’n’Sniff hieroglyphs and the world’s most mediocre circus, these poems are a veritable celebration of life from the Professor of Whimsy.

Who is Robert Garnham?

He’s a revved up raved up rocket propelled Poundland Pam Ayres, a randy raunchy rhyming buy one get one free bargain bucket Alan Bennett, Professor of Whimsy, consumer of biscuits, spoken word artist and comedy poet!Robert Garnham has been performing all over the UK for the best part of the last ten years, at fringes and festivals, poetry nights and comedy cabarets, bringing his own brand of LGBT whimsy and humour to audiences anew.

Wordplay and silliness combine with social sensibility in poems that have been honed and crafted over the years, accompanied by jokes and japes and all manner of high jinx. As a performer, he is utterly unique!

Acclaimed as having one of the funniest one liners of the 2018 Edinburgh Fringe, Robert has recently been seen in adverts for a certain building society on ITV. Robert has supported John Hegley, Arthur Smith and Paul Sinha, among others.His two books, Nice, and Zebra, were published by Burning Eye Books, and a third collection, Yay, will be published in 2021. His shows Static, Juicy, In the Glare of the Neon Yak, and Spout toured extensively and he is currently working on a new show, Yay: The Search for Happiness, to accompany his new book.

“What I love most about Robert Garnham is that he seems naïve and childish enough to believe that poetry can be for the actual pleasure of the reader. His work is an invitation to spend time in his world, looking at things differently. He is excellent company. In short he’s an excellent poet with an inimtable voice and a nice smile. There’s warmth in his whimsy, it’s sturdy not flimsy. Where others might proffer inanity he offers humanity”. Matt Harvey.

See Robert in action in this new video:

Feel free to support the work he’s doing by leaving something in my tip jar or buying me a coffee right here https://ko-fi.com/robertgarnham