Why I do what I do

Slain McGough Davey asked earlier this week why certain people feel compelled to make art and gave some reasons of his own, and this got me thinking about what I do and the reasons why. And then a couple of days later an article appeared in The Guardian which suggested that comedy is not seen as artistic or as worthy as more serious fare, and pointed out that it should be held in the same esteem, as the effort gone into making funny comedy is just as strenuous and as hard as so-called ‘high’ culture.

My one aim whenever I sit at a desk or stand in a rehearsal space is to make something that will make people laugh and enjoy themselves, and take them away from their normal daily concerns. Indeed, there can be no more rewarding sound than that of an audience laughing along with a poem or some humorous linking material or on-stage buffoonery.

I remember my first ever gig, in 2009. I was incredibly nervous, and I had spent the month before writing a couple of ‘humorous’ poems, which I’d typed out on big sheets of paper. I remember my hands shaking as I read the poems out, but the nervousness seemed to disappear once it became apparent that the audience was laughing at all the parts of the poems that I had thought were funny. It was a life-changing moment, because it meant that the sense of humour which I’d thought was unique to myself could be translated into laughs from an audience.

I look at the poems now and cringe, because they weren’t as fully formed or as realised as the ones that I now perform. In other words, parts of them went on and on for a bit. They were badly in need of editing, but those nuggets, those golden lines and phrases which had the audience laughing, still exist.

These days I work on poems for weeks, months at a time, before they are unleashed on an audience. In a way there’s more pressure now, because the audience expects to laugh and I have to live up to that expectation. I have a phrase I use whenever I’m writing, ‘This poem needs to be 33 percent funnier’. I don’t know where I got the figure of ’33 percent’ from, but it’s a good mantra to have at the back of my mind whenever I’m writing.

The poem really comes alive during the rehearsal process. It is at this time that I have a pen on hand, going over lines and refining them, making them funnier, adding attitude and tags to maintain the laughter, or build up the suspense only to pop it.

Regular attendees of my gigs will know that there’s always a serious undercurrent to a lot of my poetry. Indeed, comedy performance poet is the ideal manner in which to address certain subjects such as gender representation, heteronormativity and, in my most recent new slam poem, homophobic abuse. Taking the audience by the hand and guiding them through tough subject matter while making jokes, (and not punching down or being mean or unkind), and then getting a laugh or two along the way, as an immensely satisfying feeling.

It’s true that I’ve been told, only by a couple of people over the last few years, that comedy performance poetry isn’t as worthy or as well-crafted as the more serious end of the spoken word spectrum. And this is a shame, as one of those comments came from a poet who I really admire. In the context of a gig or even a slam, a poem which encourages a laugh from the audience is somehow seen as ‘cheating’, while comedy performance poems are just slung together with no artistic merit. The truth is, as any comedy performer will tell you, a lot of work goes into placing the words in the exact order to elicit that response, and a lot of work also goes into the rehearsal of those words, movement, facial expression, emphasis. If art is judged by the amount of hours that goes into its creation, then comedy performance poetry is right up there with anything else.

And because of this, I only ever perform a tiny amount of what I actually write. When it comes to being performed, my poems probably have a one in ten chance of ever making it in front of an audience. Those that don’t are prodded, poked, re-worked, or sometimes simply torn apart, the juicy, funny lines being extracted and popped into other poems.

So, why do I do what I do? For a start, it’s probably the only thing I’m halfway decent at. I can’t cook a quiche to save my life, or put a fuse in a plug, or even catch a bus on a good day without causing absolute bloody mayhem. But I can write and perform comedy poems that make an audience laugh.

And secondly, there’s no greater feeling than getting off a stage with an audience clapping and cheering because you’ve just made their evening. I remember Bristol last year, performing at the Arnolfini Theatre and then, rock and roll monster that I am, I found a late night twenty four hour Tesco and did my shopping. In the bread aisle I came across a couple of people who had been in the audience and they thanked me for making them laugh and cheering them up. And that, oh, that was probably the highlight of my year!

Feel free to support the work I’m doing by leaving something in my tip jar or buying me a coffee right here https://ko-fi.com/robertgarnham 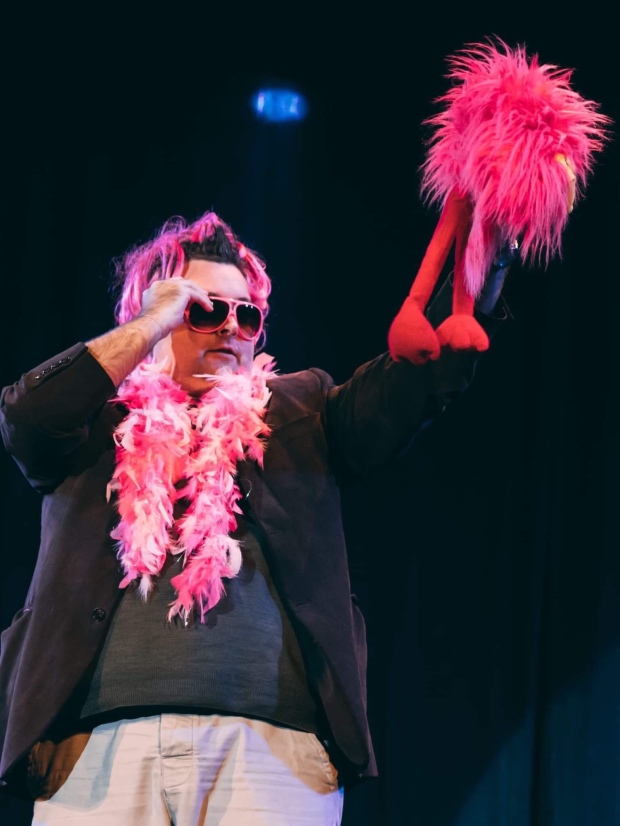 How are we going to solve
Various big big things?
Three golden rules!
(Shame about my clicker)

1. Achieve the continuous
2. Apply it like a haberdasher
3. Can be split into twenty four subheadings

(This clicker is not working!)

If I put my hand in my pocket
And wander around
It makes me look more relaxed!!!

You’ve got to understand
That people
Always make
The wrong decisions.

Madam, when did you last knowingly
Have spaghetti?

(This clicker is getting on my tits)

You!
You fiend!
You bastard!

This clicker
Definitely
Is not working. 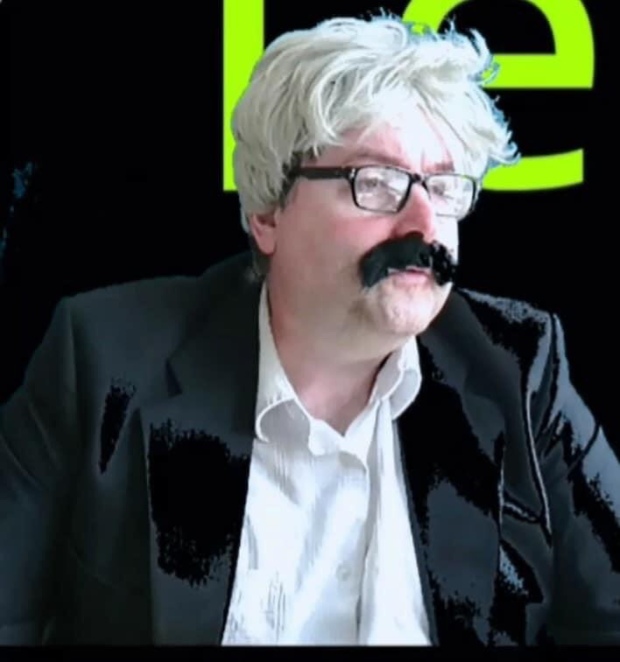 Here’s a silly poem about going to Paris and having a miserable time and trying to break up with someone but you can’t because the metro is too noisy, and by the way, I’m using a salad spinner to mimic the sound of the metro. Apart from that, normal poem. 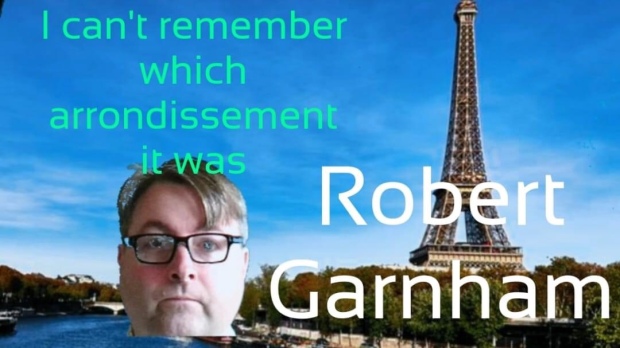 In 1996 I moved with my parents from Surrey to Brixham. My parents had come down to Brixham during the 1960s for various holidays and they had always loved the place and its people. They had always said that they wanted to retire there. I came with them, and the whole place felt like a different world. I immediately fell in love with the history of the fishing industry and the traditions of those families who had a long association with the sea.

I moved away from Brixham in the year 2000, but I have continued to visit every single weekend, using the room at the back of my parent’s garage as a makeshift rehearsal room as my career as a comedy performance poet grew. When the chance came to write some poems on a themed idea, funded by Torbay Culture through the Arts Council, I jumped at the chance to learn more about the Brixham fishing industry and the people who work within it.

With the help of Clare Parker, my producer, I was able to infiltrate this world. I spent a little bit of time on a trawler, (in the harbour, though; we didn’t go anywhere!), and I interviewed trawlermen and people associated with the industry, as well as locals to get their view on what the fishing industry meant to them. I was also able to go behind the scenes at Brixham Museum and chat with Anna Kisby Compton, the curator, about the role that women played in the history of the fishing industry. I was also deeply inspired by Samantha Little’s book, ‘Battling Onwards : The Brixham Fishing Fleet 1914-1918’, published by Brixham Museum. I also spent some preparation time chatting with John Hegley, a much more accomplished comedy performance poet, who gave me some ideas on how to approach the project, and who suggested poems I might read or listen to by way of inspiration. Finally, I chatted with Maggie Duffy, Brixham-based singer and songwriter, whose extensive knowledge and understanding of the town and its people were invaluable.

I have recently published these poems in the form of a pamphlet which, for now, you can order from Amazon. The whole project has been an incredible learning experience for me and has left me with an increased understanding and affection for the town of Brixham. 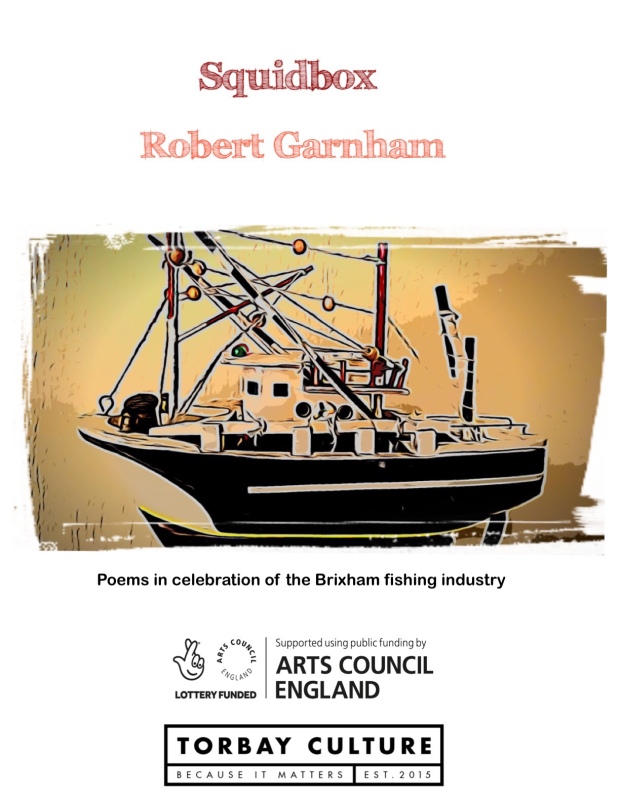