Three hundred or so low guttural individual voices
Combine into a cohesive whole, a chorus of
Feral anticipation as custard coloured titans
Skip on to the pitch, the first among them kind of
Punches limply through a paper hoop
Emblazoned with their team sponsor’s logo,
J. Arthur Bowyer’s Synchro-Boost Houseplant Compost,
Three half-hearted palm slaps and then the paper gives way,
These athletic specimens of masculinity and matching socks,
Shiny blue polyester shorts a-gleam under the spotlights,
Back slaps and star jumps, half-hearted jogging,
While the opposing team, who must have had an
Awfully long bus ride, kind of slouch on to the field,
Mooching along the sides of the pitch like slugs around lettuce.

I have come with a friend who’s there for the football
But also to show me the football and he
Made a kind of grimace when I said I’d brought a book.
The home team did some warm up exercises.
‘They’re dancing!’ I said, ‘it’s all a bit camp, isn’t it?’
Number 32 is just my type, bleach blond hair, stubble,
Long legs and snake hips.
‘Coooo-eeeee! Over here! Yoooo-hooooo!’
My pal said, ‘He’s on loan from Bournemouth’.
I said, ‘That’s okay, I’d give him back in one piece’.

The stadium announcer extols the virtues of both teams
And attests to the veracity of
J. Arthur Bowyer’s Synchro-Boost Houseplant Compost,
And the game begins, number 32s elegant fingers splayed
As he dribbles the ball, like he’s a ballet dancer,
Or a gymnast balancing on a beam, though even
The home team audience yells that he’s a useless
Time wasting tossbag who gets the ball and does fuck all,
Go back to Bournemouth you useless waste of space.
He’s got lovely eyes.

The ground rumbles and thuds as they race from one end
To the other, kicking up clods of grass and winning
The applause of the audience who shout encouragement,
These lads in custard who aim at the goal at the other end,
Someone misses a sitter, someone else scuffs it,
And then the ball goes in the corner and two opposing players
Prance and dance around it like Torville and Dean.
My eyes kind of wander off to the other side
Where twenty or so or the away team supporters chirrup
And you can just make out the faded lettering of
Last years sponsor showing through under a new coat of paint,
McClintock’s Polystyrene Coving Ltd. is better than any competition.
Only the word ‘tit’ is still showing.

My pal has already told me in advance
The skill of number 10, whose speciality is
Less the sublime and precocious nature of his craft,
More his knack for falling over at just the right moment,
Now he goes down like a sack of spuds and the
Audience erupts, apparently this is a good thing,
He’s allowed to aim a ball at the keeper and boom,
In it goes, I almost spill my cup of tea
As I’m jostled and the lad next to me flings
His arms around my neck, jumps up and down, the
Tea oscillates as I breathe in his Lynx Africa antiperspirant,
I must say I enjoy it a lot.
And now I want number 10 to fall over again.

Wouldn’t you know it, he does, never fails to disappoint,
Fortune smiles twice in the low setting sun,
Achilles in his death throes, Icarus mid melt,
Our hero is downfallen and rolling in the mud like a hippo,
The ref’s cheek bones prominent as his blows his whistle.
Boom, scores! The audience is enraptured once again,
Another clingy embrace of Lynx Africa,
I’m a cuppa carrying eucalyptus and he’s my own personal koala,
Number 32 looks down wistfully as if jealous, I hope,
Oh, I hope, of me and my new found tame delinquent
Who sips a surreptitious beer from a paper bag and
Chinks against my half spilled Darjeeling, cheers!
Caught up in the joy of the moment I attempt to start a chant
Based on the third movement of Beethoven’s Pastoral Symphony
But it doesn’t take hold.

Really, I’m only here for my pal who’s brought me along.
This is his culture and I’m an interloper.
But I want to show that I understand life
Beyond the cliche, broaden my mind and experience
Every nuance of our shared cultural history.
‘We’re winning ‘, he says during the interval
As we queue for pies sold from a shed
Next to the unoccupied press box.
‘Well, they are’, I point out, ‘We’re just watching’.
I’m taking him to a drag show next weekend.

Two more goals soon after the interval.
Perhaps the audience has tired itself out,
I’m the only one who seems excited, and my new friend
In the McClintock shirt hardly seems inclined at all
To repeat his usual celebratory hijinx, no doubt
Enervated by his previous exertions and the two litre bottle of cider
Stuffed down the front of his trackie bottoms,
And when the ref calls a halt to the show I pat
My pal on the back and ask whether four nil in some kind
Of club record.
It was two all, he says, they switched ends.
They what?
Why didn’t the announcer explain this
Before I got excited over nothing?

Oh, this communal kickabout, this colossal crowd clapping
This unified oneness this matey definitely not homoerotic bonding,
This celebration of the hunter’s skill this
All-encompassing rough and tumble this slippery sport a spurt
With spurious curiosities this worship of the physical
This proof of prayer this spectacle this weird excuse
To suddenly bellow ‘Nice tackle!’ and no one bats an eyelid
This playing out of certain urges but would they ever let me
Join in? No, probably not, and number ten has got mud all over him.

What did you think?, my pal asks
As we file like clocked off factory workers
Into the adjacent streets, not that he’s interested really,
Immediately he then adds, shall we get some chips?

I think of number 32
Isolated
In the dressing room. 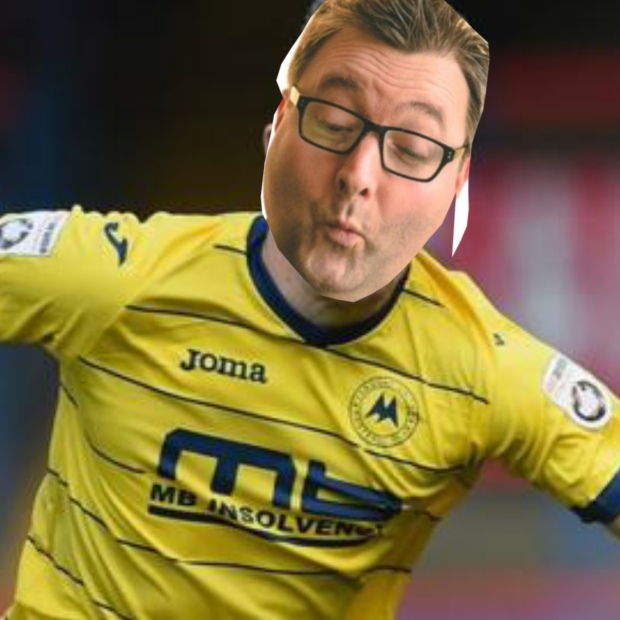