And then before you know it the fringe experience is almost at its end. I only have two more shows to do and one guest spot and then that’s it. The end of Spout, for now, and I can start looking forward to doing poems about things other than tea. That’s going to be such a bonus. I’d almost forgotten that anything else existed as a potential for poetry.

I’m writing this in a crowded bar at midday having just seen Melanie Branton’s lovely kids poetry show, Rhyme Marmalade. And that’s the amazing thing snout Edinburgh during the fringe, you can end up seeing anything and whatever your friends might be doing, rather than reading about it later in social media.

I had one of those days, yesterday, during which I was walking around the city almost all day. I tell you, I was knackered by six in the evening. It was my fault, really, as I’d spent the morning doing my laundry at the student accommodation and half of that time was figuring out how to load credit on to the card that one needs to use the washing machine. And that left me with less time actually to get out and do the things I needed to do.

And one of the things that I needed to do was to go over to the new town area and appear at an LGBT cabaret show at eleven o clock at night. Only it was due to start twenty minutes after my show ended. So I did a dry run, choosing the route and finding the venue so that it didn’t come as a nasty surprise when I had to do it for real. I then discovered that I’d left some bits at my student flat that I needed, so that meant a walk across town in the other direction to fetch them. It was one of those days.

So I only had the time to see one show, and that was Dominic Berry’s show at the Zoo venue, and I loved every moment of it. Dominic has always been one of my favourite performers and a personal influence so it was great to catch up. I won’t give anything away about his show, suffice to say that it is brilliant, funny and meaningful all rolled in to one.

So, then. Two more days of flyering. Two more days of Spout, and the sound bleed coming from the room next to my venue, where it sounds like someone is being murdered every night. And then a thirteen hour train journey back to Devon followed by work the next morning. Oh well.

This bar is getting crowded now of people coming in for the next show. Apparently she has on office party, and she’s also been on the radio publicising her show. There must be fifty or sixty people in here. My average audience has been two. . .

Onwards, as they say, and upwards. 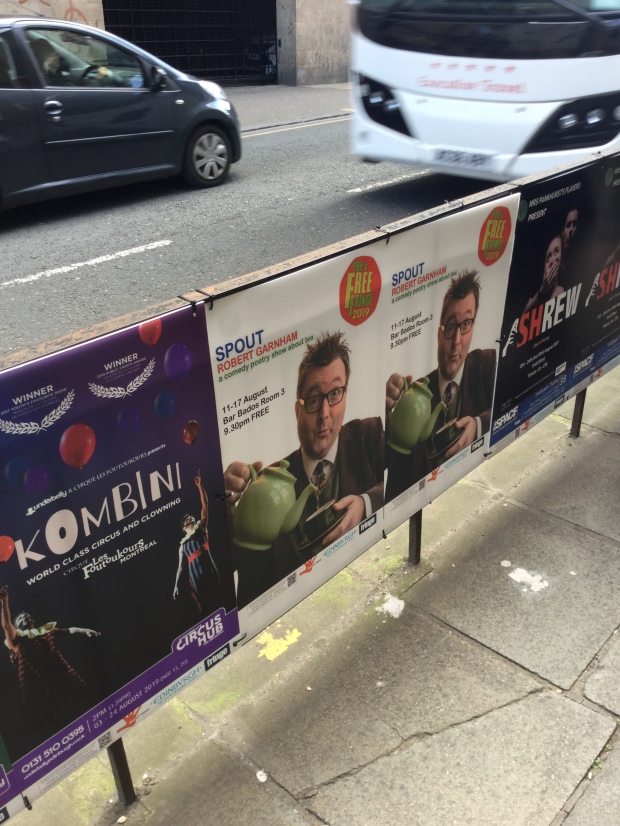