So today is already my last day at the Edinburgh fringe. As always I’m going to feel very guilty leaving tomorrow morning. Guilty knowing that so many of my friends and my new friends will still be here, working away and worrying and celebrating and commiserating and I’ll be on a train going back to Devon, hopefully. Or stuck at Preston again.

This is my sixth time at the fringe. I started out with Dan Haynes in a show called Poetry Ping Pong, and since then I’ve brought Static, Juicy, In the Glare of the Neon Yak, and of course, Spout and The Two Robbies. I also had one year doing guest spots at other people’s shows. And that was the best. It was totally worry free!

I went flyering today. And I met some very interesting people. One lady pointed at my flyer and said, ‘oh wow, it’s you!’, like this was the most amazing thing ever. And then I met a gentleman who was very excited because he had just seen Eddie Izzard walking along the street. ‘I saw Frank Skinner the other day, too’, he said. ‘And I told him a joke! It goes like this. Why shouldn’t you wear Ukrainian underpants? Because Chernobyl show. Ha ha ha! Do you get it? Chernobyl show. Yer-nob-will-show! Ha ha ha! Do you think he will use it in his act?’ I told him that he might do.

My audience yesterday was amazing. Not only was it my biggest yet, (if you include me, then it was in double figures), but a couple from Leith came along, and they had seen me last year. Indeed, they’d come especially to see me, which was totally amazing to know that I have fans in so many parts of the country. And after my show they gave me a packet of Scottish shortbread as a present. How many other performers get presents from their audience, I wondered.

As soon as my show was done I had to scoot across town to a cabaret where I was doing a guest spot. While I was doing this, the most amazing torrential rain storm erupted. I had to shelter halfway at a shop awning because the rain was so intense. I think it would have been dryer to stand in a shower, that’s how intense the rain was, and the street became flooded within less than a minute. I was joined by a party of young men who were obviously out on the razz, and as the rain intensified they took off their t-shirts as they surrounded me. And I was thinking, hello, this is a nice day at the office. I’m sure they might have taken off more had it been even wetter.

So it’s been an amazing week and as ever, I have no idea how I’m going to go back to normal civilian life. This has been a week of amazing memories and wonderful people, and apart from the train dramas at the very start, nothing has gone hideously wrong. And will I be back next year? If I can get my head around flyering, and actually enjoy it, then yes, definitely. 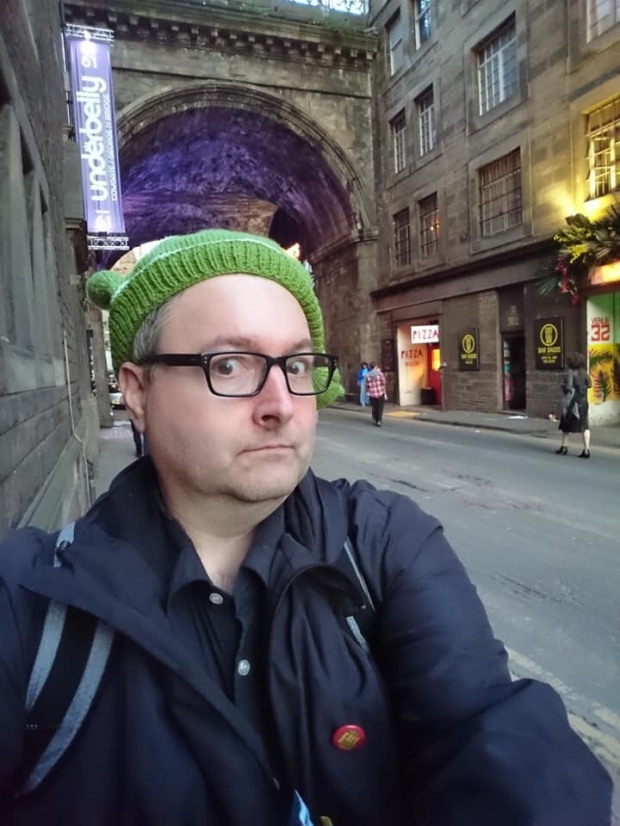