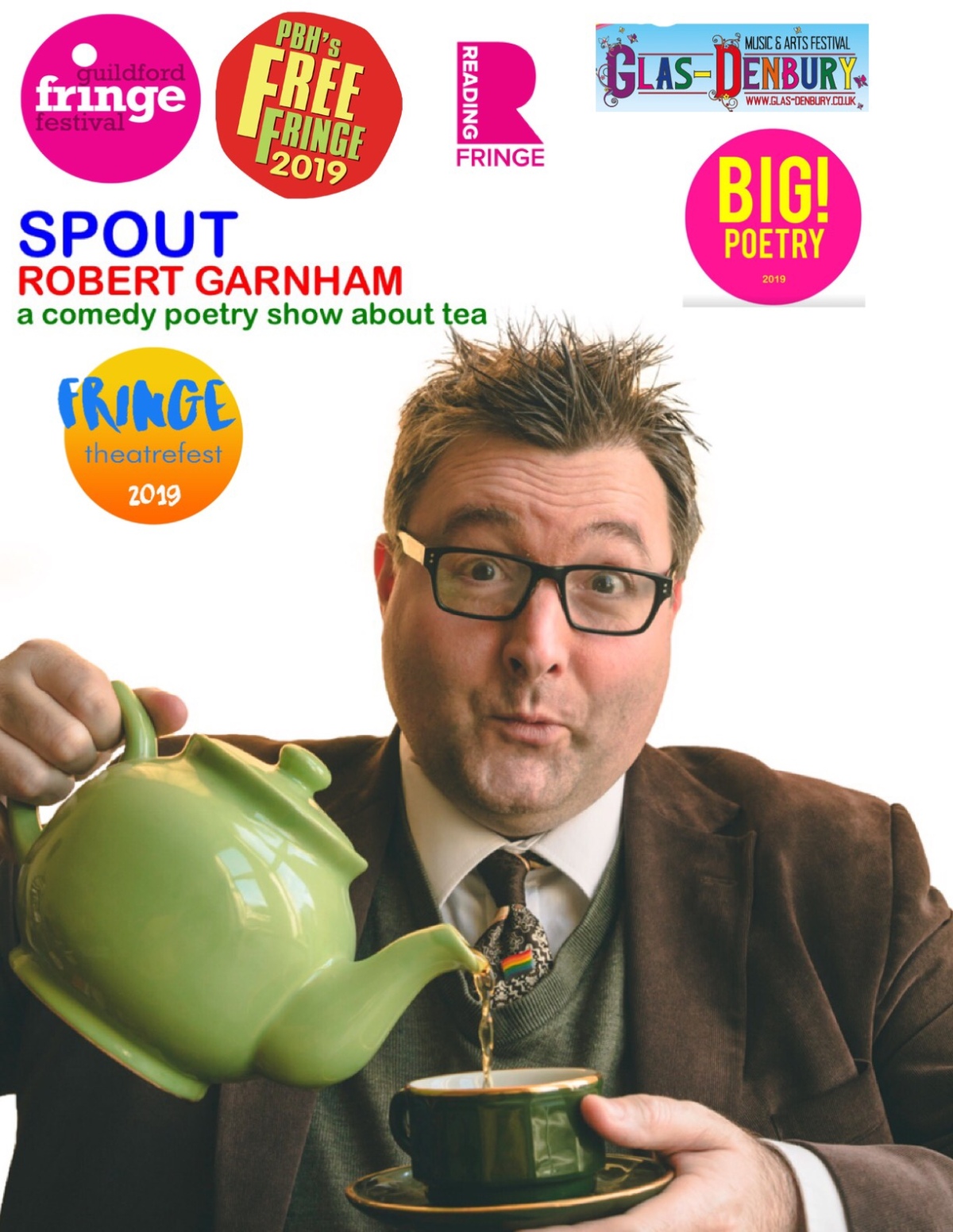 Spout is an hour show featuring poems, stories and autobiographical silliness all around the theme of tea. If you’ve ever enjoyed a cup of tea, or are a coffee drinker eager to make that leap, then Spout is the show for you! Spout is sure to create a stir.

Meet Roberts gran, who’s very fussy about how she likes her tea. Meet Aunt Rosie, who likes to sing while she’s boiling the kettle. Marvel at poems about hipster tea shops, tea-based rap songs and a group of magical fairies who specialise in baking cakes for gay weddings. This whole show will make you see tea anew!

Robert Garnham is an award winning LGBT comedy spoken word artist from Surrey. He has been long listed three times as spoken word artist of the year and has features in TV advertisements for a certain building society. Spout is his ode, his love letter, to this beverage of kings, this every day magic potion, tea!

Spout will be featuring at the Barnstaple Theatrefest, Reading Fringe, Guildford Fringe, the Glasdenbury Festival, Big Poetry and the Edinburgh Fringe, with other events to be announced soon.

Here’s an interview with the creator and writer and main performer of Spout, Robert Garnham!

I didn’t sit down to write a show about tea. I just realised one day, ‘hang on a minute. I seem to have an awful lot of poems about tea’. I think the reason behind this is that I spend a lot of time in coffee shops, invariably drinking tea, and wondering what to write about, and then looking down at the tea making paraphernalia in front of me and thinking, ‘yes, that will do’. In fact, I had so many poems about tea that some of them couldn’t possibly be squeezed into the show.

Of course, the show isn’t just about tea. In a funny sort of way, it’s probably the most autobiographical thing I’ve done. My grandmother and my aunt both feature prominently, and it was the weirdest thing, they just kind of barged their way in to the script while I was writing it. I would visit them both and invariably, out would come the tea pot and the whole ceremony of making a cuppa and having a chat. And my word, they could chat. I’d hear all the gossip about the neighbours and then they’d move on to stories about the olden days. It was always difficult getting a word in edgeways.

Working in retail, my first responsibility of every day would be to make everyone a cuppa. ‘We don’t do many miles to the cuppa’, is the saying we adopted, to explain why we would stop so often for a brew. And whenever a new recruit would start, I’d say to them, ‘are you good with technology?’ ‘Yes’, they’d reply. ‘Great, then can you go and put the kettle on’.

I don’t know about you, but I prefer mugs to cups. There’s nothing more refreshing than a strong tea made in a big thick mug. You can’t gulp tea down with a dainty cup. And there’s always the risk of accidental slurpage. A mug makes tea informal. They’re also easier for washing up, too, more robust than dainty cups. There’s a line in the show, ‘I’d rather have a dainty cup and not a builders mug’. This is pure fiction, personally speaking, and I only put the line in there because it rhymed and scanned, and not because it is true. I’m a poet and I’m allowed to do things like that.

So how would I describe Spout? It’s certainly scatalogical, a little bit weird, yet it hopefully takes the audience to places that we all know and recognise, whole simultaneously making them think about the world anew. I mean, that’s pretty lofty, isn’t it, having a show with such aims. And I hope it means that you might learn something about me, too. We’re all different, and yet we’re all the same. We are brought together by the things that we enjoy.

This show is dedicated to my grandmother Winifred, and my aunt, Mildred. Both were strong, independent women, Londoners who survived the Blitz, and helped imbue in me a love of those little stories which keep us all sane, tidbits of gossip, anecdotes, and humour in all the kinds of places where they might otherwise have been lost. They were also both prolific tea drinkers.

I hope you enjoy watching Spout as much as I’ve enjoyed writing and rehearsing it.