I know what people are thinking when they see me. I know what theyre thinking, they’re thinking, now then a man with a smug demeanour. There’s a man who’s not in it for the money.

There’s a man who forsakes the capitalist system and does not perform poetry for personal monetary gain.

Well let me tell you, I got books for sale.

I tried to write a poem about an old photocopier last night. It just wouldn’t scan.

People tend to know instinctively that I am a poet. How so they know this? Is it the jacket? Is it the book of poetry? Or is it that I arrive at gigs alone?

Yet I don’t feel like a poet. My rhyming couplets have all split up. My found poems were hidden for a reason. Nobody has hung around long enough to tell me what my rhyme scheme is.

To be honest, I don’t think it would work. Have you ever seen a group of poets trying to solve a planning dispute?

I suppose it depends if they work in rhyme or blank verse.

Well, I think we’ll put the school next to the pool. And perhaps also the church hall.

The library. Hmm, has this town got an aviary?

The food waste refuse anaerobic digestion chamber . . . What the hell?

Mind you, judging by the high street in Swindon, it looks like the surrealists have already been at work.

So I’m a poet, and I get all kinds of weird commissions. Sometimes I think that my career is going nowhere. Sometimes I don’t.

I’ve recently been working as a Poet in Residence at a paper clip factory. It really is stationery.

I was supposed to do a workshop for a fear of commitment support group, but nobody put their name down.

The other night I was double booked, I was also meant to be at a gig for a group of amnesiacs. So what I’ll do is I’ll go along next week and remind them how good I was.

I’m actually looking for ways out into other lines of work and I think I’ve come up with a winner. I’ve decided to start up assertiveness training courses.

Because if it doesn’t work, nobody’s going to ask for a refund. They won’t be brave enough.

But poetry for me is a lot like sex. When it’s good, it’s very, very good and you wish it would never stop.

And when it’s bad, it’s just plain embarrassing. Although I do get roughly the same number of laughs.

The thing I like best about poetry is that it’s not all about profit and personal gain, it’s not a hugely capitalist enterprise, people aren’t in it to make a quick buck. And by the way, I’ve got books for sale. 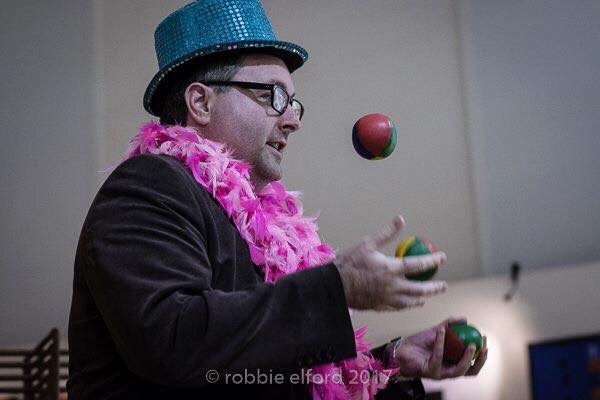