The other day I was in a second hand bookshop when I came across a Ladybird book of the 1984 Olympics, and all of a sudden I was transported back to a time when I was ten years old and a long, hot summer seemed to stretch ahead. My mother had bought me a copy of the same book, in which there was space to write in the winners of the various competitions. Now, you know me. I’m not exactly in to sports, and the idea of sitting there and watching the whole thing was not exciting, but I loved the idea of filling in these pages. But then with dread I realised that I would be away at Cub Camp for the first week of the Olympics and I would miss all the action. The joy of filling in all the blank pages would be denied and the book would never be complete.
I was not looking forward to Cub Camp. It would be the first time in my life that I would be away from home without my parents and I was sure that I’d be missing out on something, or that my family would be having loads of fun without me. Sure, I’d be with my friends, but I didn’t really know most of them, not really. They were just kids, and I tolerated them at the best of times. Indeed, being the 1980s, we all had the same bowl cut hairstyles and probably looked indistinguishable to the outside observer. But I much preferred being at home.
Now I say ‘Cub camp’, but we would actually be staying at a place called Chorley Lodge, which was a converted outbuilding on a former RAF World War Two airfield, on the edge of the New Forest in Hampshire. I hadn’t thought about this place for years, but the other night I watched a documentary about the natural history of the New Forest and I got to thinking about Chorley Lodge. I did a quick Google search and there it was, in all its glory. A plain concrete hut painted green with basic 1940s functional windows and probably enough asbestos to wipe out half the planet.
I remember hating it from the moment I arrived. We were looked after by a scout leader from a different troop to our own, who had this very weird idea that we should all go for a jog every morning before breakfast, but do so without our shirts, which in retrospect seems borderline dodgy. So we’d wake at sunrise from our austere bunks inside this palace of concrete blocks, and run through the adjacent pine trees which bordered what had once been the airfield, home to a hearty breakfast of puke inducing porridge.
The rest of the day would then be spent doing all sorts of wholesome blokey things. We would be split into groups of about four and assigned to some expert in their field who would do their best to teach us survival techniques or handy blokey pursuits. Orienteering was one of these, how to read a compass, how to pack a backpack, how to light a bonfire. But it always seemed that some other group would be doing an activity which was much more exciting. For example, a friend of mine had a brilliant young instructor who ran a half day practical workshop in building rockets, because apparently this is something that comes in handy if you’re ever caught in the wild. While my group had a half day workshop in Morse code. We’d be sat in a clearing dot dot dot and dash dash dashing while I could hear my friends out on the former runway launching rockets and whooping with excitement. ‘Robert, you really must concentrate. Now, what was the message I just sent you?’. Whoosh! Whoosh! Ha ha ha! ‘Erm . . Elephant knickerbocker dustbin Aunt?’ Whoosh! Kapowwww!
I think the whole week instilled in me several things which have lasted till this day. First, my hatred of communal sleeping arrangements probably stems from all thirty of us in one dorm and not feeling able to be myself. Secondly, my absolute revulsion at porridge. But thirdly, my love of forests, airfields and old buildings, even this weird cranky old concrete shack, which apparently has now been demolished, probably due to all that asbestos.
On the last day we all made wooden blocks with the name of the lodge and the date, and mine has been on the wall of my bedroom at my parents house for the last forty years. So that week at Chorley Lodge has remained in my memory, along with nighttime camp fire sing songs, outdoor eating and the vaguely kinky excitement of running semi naked through a forest.
But I never did get to complete that Ladybird Olympics 1984 book. 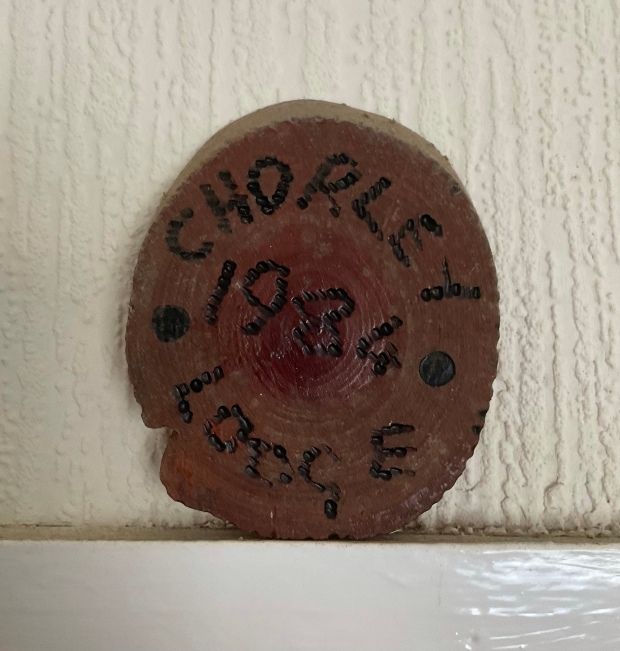 Why on earth was I made to join the Scouts?

Why on earth was I made to join the scouts?
My parents hoped it would get me out and about.
The only thing it did
was implant in me a doubt
That I was anything like the other boys.

There was so much that I really couldn’t do
Like light a fire or paddle a canoe
The one thing it instilled in me
was being part of a crew
And the fun that I could have with the other boys.

It wasn’t the sort of place where I’d leave my stamp
Or go on hikes, across the moors we’d tramp.
Although in hindsight
it taught me everything about camp
From singing songs with all the other boys.

We’d cut down burly trees with a big old axe
And have to always strive to do our max
Dressing up in drag
singing along to backing tracks
Which is what I did with a few of the other boys.

We were taught that life could sometimes be quite bitter
And after camp we’d pick up all the litter.
Who on earth has plastered
the tent in tinsel and glitter?
That was me and one or two of the other boys.

We had to swear an oath to Baden Powel’s mission
Take a course in tying knots with deadly precision
We never went that night
cos it clashed with Eurovision.
Which I watched at home with all of the other boys.

Our leader started to think that things were amiss
Or maybe that we were probably taking the piss
Don’t look so sour I said,
just give us a kiss
And that’s how I left the scouts and the other boys.