Today started out weird. There are a lot of musicians staying at my student accommodation and as a special treat they decided to put on an impromptu spur of the moment concert. So a youth orchestra set up in the ground between the student flats and had just started but then had to stop because the bin lorry needed to get through. The Albert Hall this ain’t.

Later on a similar thing happened. I stopped to watch a street acrobat, he had a huge crowd around him and he was doing something very impressive involving a tightrope and some juggling, but nobody was paying the slightest attention because a lady had had rather too much to drink and was having her can confiscated by two police officers. And I tell you, she was kicking up such a stink. Shouting and screaming and yelling and everyone was watching. The acrobat almost fell off his tightrope.

One of the pleasures of Edinburgh is that every now and then you might see someone famous. Eddie Izzard once tottered on a cobblestone and almost crashed into me which running across a street once, a few years back. But today, I saw Paul Merton, a comedian I have admired for a very long time. And a cunning plan took hold. I would give him my flyer! And I would invite him to Spout! And he would come along and like it a lot and tell everyone, and before long my show would have audiences of a hundred or so. But instead I babbled something incoherent like, ‘I’ve always been a fan of your work!’, and he said, ‘Thanks’, and I said, ‘Have a good afternoon!’, and he said, ‘well, i’d better be off, then’.

I did a show today with poetry and folk legend Rob Barratt. We had been given odd slots around the schedule to fill in for people having a day off. We got to our venue only to find a comedian setting up. She had had yesterday off by mistake, instead of today, and was firmly intent on doing her show today anyway, even though the room had been scheduled to us. Seeing that she was not exactly in a position to do her show, alas, she relented, and the room was ours. Amazingly, this was Rob’s debut at the fringe, and he was excellent, funny and as whimsical as ever.

I went for a hot drink at a trendy drinks van next to one of the squares. Tea please, I said. Sorry, we don’t do tea. Oh, coffee then. Ok, sure, that will be four pounds. How much?! Four pounds. OK, here you go. I’m sorry, sir, but we don’t take coins. And just wait at the end of the counter, please. Fabian will make your coffee, he’s a coffee artisan and it should only take six minutes . . .

I’m back at my accommodation this afternoon. I’m having a few hours off before flyering, time I’m using to rehearse poems for the BBC poetry slam tomorrow night, which I shall be losing in the first round, hopefully doing a valiant job as the oldest competitor. So I’ve been running through my poems and timing them, standing in the window and suddenly realising that everyone must be able to see me, gesticulating madly like a bad politician. Even the bin men looked up, at one point. 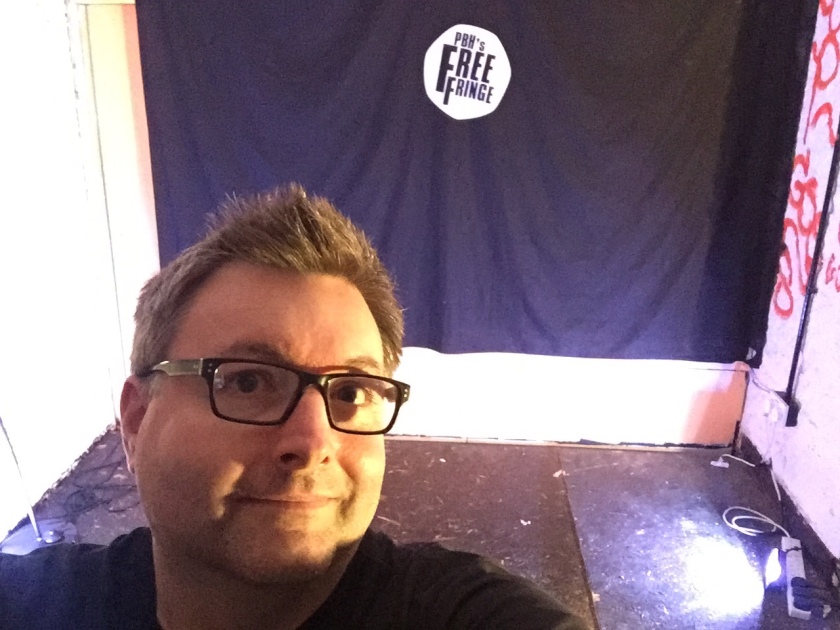