I usually fly to the Edinburgh fringe. I usually fly for two reasons. The first is that it’s cheaper than the train if you can book it ahead in time. The second is that it only takes an hour to fly from Exeter to Edinburgh. However, as you may know, I absolutely love flying. I love everything about it, the sheer impossibility of an object heavier than air floating through it, the raw power of the engines, the speed of take off and landing, the weird noises the flaps make on landing, and, with the Dash 8, the disconcertingly bumpy landing. But I didn’t fly this year. Feeling an environmental conscience telling me that this was not good for the planet, I decided to get a train.

And maybe, perhaps, for all those times in the past, the planet bit back.

I started out at six in the morning, walking to the station in Paignton with all of my luggage and then catching the local service to Newton Abbot. Things were going great so far and I even had an idea for a poem, which I wrote as a draft as the train chugged its merry way through the South Devon countryside. At Newton Abbot I transferred to the long distance service to Birmingham. Now, the slightly interested and ironic fact of this is that the train was going to Edinburgh, but the booking office and the website assured me that if I got off at Birmingham, I’d be able to catch a faster train that took the west coast line, whatever that is, getting me in to Edinburgh at two in the afternoon. Sure, why not!

The journey was marked by my decision to listen to as many Laurie Anderson LPs as possible. I managed two. My attention was taken by the machinations of an old lady two seats ahead of me. Travelling alone, she became insanely jealous of the seats that other people were in, and would come and stand over them. ‘Will you be sitting there long?’, she would ask. ‘Yes’. ‘Oh’.

She then decided that she wanted a table seat. A young man was sitting at a table working on a laptop. ‘I’d like your seat’, she said. ‘When are you getting off’. ‘Glasgow’. ‘Oh’. And every time the train started to slow for a station, she would be up again hovering over this young man with his laptop. ‘Just checking to see if you’d decided to get off here’. ‘No, I’m going to Glasgow’. ‘Oh. Oh, never mind’.

The train started to get packed so she then came over to me and asked me to get her luggage. Sure. I did so. She then plonked it on the seat next to her at the window side, and employed the tactic of sitting on the outside seat, so that nobody could sit next to her. It was all most amusing.

At Birmingham I transferred to the train to Edinburgh, the west coast line special. Feeling pretty smug, I found a great seat and even contemplated opening the small bottle of red I’d bought the night before, wondering if it was socially acceptable to swig from the bottle, having nothing to pour it in to. By now it was getting on, it was almost eleven o clock in the morning. I’m not sure of the etiquette for swigging red wine for a bottle on a west coast line train at eleven in the morning, but decided not to. Perhaps, I pondered, this is better than flying after all.

And then the planet bit back. At Preston station the train managed announced that the service was terminating and that we would have to ‘de-train’. Apparently the line was flooded further north, and we would not be able to get to Scotland on the west coast line. We all spilled out on to the platform and I had no idea what was going on or where I was meant to go, and I even wondered if I might try to get to Manchester Airport and fly the rest of the way. A rather harassed gentleman in a high vis jacket pointed me towards platform six, where I’d be able to get a train to Manchester, from where I might get a train, as he put it, ‘north’. I thought I was already in the north, but there you go.

The only trouble here was that trains kept arriving which had to terminate, and passengers were ‘de-training’ all over the place, and the trains to Manchester kept shifting from platform six, to five, to four, then back to six, so I spent the next hour hauling my luggage from platform to platform and just missing trains to Manchester, because they were hidden by the bigger trains that were terminating.

The train to Manchester was standing room only, and I stood in the vestibule with a young family from Manchester who had three young daughters in push chairs, and a sullen teenage son called Ed, who they didn’t seem to care much about at all. Ed just stood in the corner looking sullen while the parents entertained the young kids. I felt for Ed. A friend of mine has just had her lips made bigger so that she can pout better in her Instagram pictures. I told her that she could pout for free. Ed would have given her a good lesson in pouting.

At Manchester I took the first train I could find to Newcastle. Amazingly I managed to get a seat. And the atmosphere was most jovial indeed. I sat with a party of pensioners who were going to the fringe but had got split from the rest of their group, who were taking an alternative train to York instead of Newcastle, and they were racing one another, keeping in touch by mobile phone having all had to de-train at Preston, too. They got off at York, and then three young ladies got on who were had been out on the town in York celebrating their friends wedding, and they were absolutely plastered and yet good fun, chatting up the young man sitting next to me, and the young man in front of me, and the young man across the aisle from me, and the young man at the end of the carriage, and the young man who was the train manager. They didn’t speak to me, though.

At Newcastle, I had half an hour to spare to get a cup of tea and was served by an incredibly cheerful young man. I’ve only been to Newcastle once before but was quite taken with how cheerful everyone there seems. This young man in the station cafe kind of reminded me that maybe, when I retire, it’s Newcastle that I’d like to live.

Eventually arrived at Edinburgh at seven in the evening, thirteen hours after setting out. I hopped into a taxi and we drove through the city. We passed a young man walking along the pavement dressed as a clown. ‘My god, did you see that?’, my taxi driver said. ‘He was dressed as a clown! I mean, what the hells all that about, eh?’ I would have thought that a taxi driver from Edinburgh would be used to such things during the fringe, but there you go.

So I arrived at my accommodation around half seven. My room looks out at Arthur’s Seat, and just as I looked out the window, the most amazing thunderstorm commenced. It seemed a fitting welcome. I’ve had a good nights sleep and I am getting ready for a day of flyering and meeting friends and perhaps seeing a show or two. Due to administration errors, my show is not listed anywhere so it feels like a secret show, a show that doesn’t exist, which will make it incredibly hard to get anyone to come and see it, but it at least takes some of the pressure off.

So yes, I’m here, now, and come on Edinburgh, it’s time to work your magic! 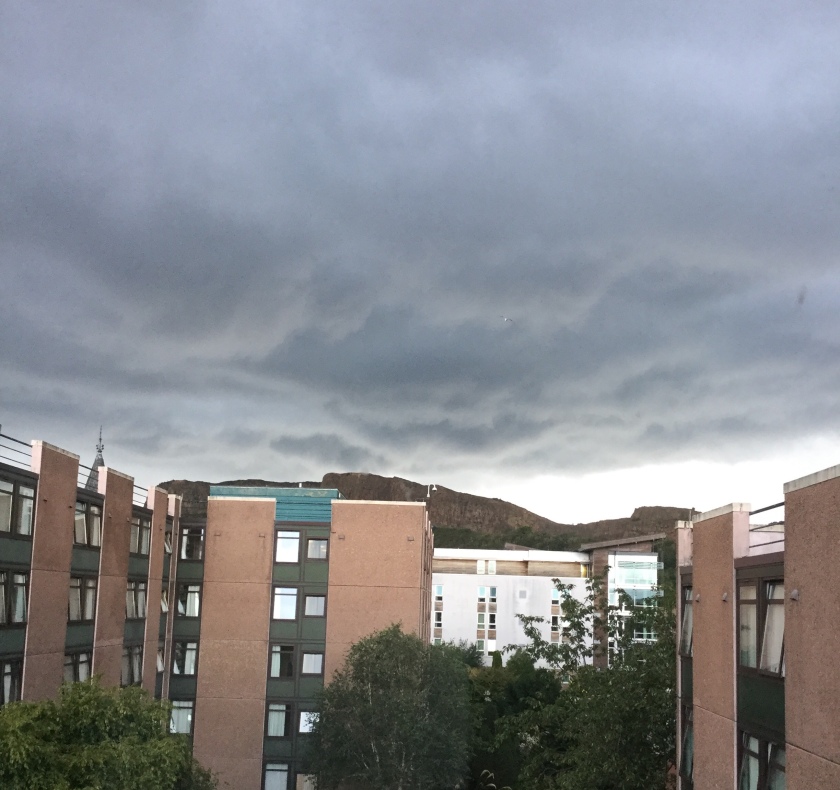