Here’s the transcript of a short speech which I shall be giving tomorrow at a college.

When I was asked to give a speech on the importance of Reading, I was immediately enthused by the subject matter, as Reading is one of my favourite towns in Berkshire. I checked with the organiser and he said, no, reading. Not Reading. Ironically, the start of my essay on reading had been confused by a case of misreading. So you see the irony, there.

I’ve always read books. When I was a kid, my mother used to take my sister and I to the library after shopping on a Friday afternoon. The kids books were all kept in a wooden tray which you had to flip through. My sister liked all kinds of fantasy books about caterpillars that could speak and grizzly bears that could speak and even as a child I thought that there was something a little naff about this. Animals didn’t speak. Not even Tony the Tiger. I preferred the Gumdrop books, about an old, blue car. It didn’t speak or have any personality, it was just a car. I recently gave some Gumdrop books to my nephew and he said that they were boring. In any case, he’s probably too busy to read Gumdrop books, what with his postgraduate studies.

My mum had a bookcase at the top of the stairs on the landing, when we were kids. It had a glass sliding window as if all the books within were incredibly valuable. Most of them wee Jilly Cooper paperbacks but they all had similar spines and this kind of fascinated me, I dreamed of a time when I, too, would have my own books published with their spines all showing my name. Every now and then my mother would let me look at some of her books, they seemed so precious and this got me in to reading.

The bookcase was recently broken up by my father so that he could use the wood as a mount for his darts board. True story.

As a kid, mum would read books to me. She would try and miss out pages but I would always know. She then got bored of this, so she bought a tape machine and recorded herself reading books. Instead of sending me off to sleep, this actually freaked me out and I couldn’t possibly sleep, what with her disembodied voice oozing from the darkness, and I had nightmares for a month the day that the tape got chewed up.

As soon as I was old enough to read, I’d read with an unusual passion, and I’d read anything. Enid Blyton gave way to Jack London, and a book about the discovery of the St Lawrence River, for some reason, became my favourite childhood read. A book for kids by the astronaut Michael Collins called Flying to the Moon became another firm favourite, shortly followed by anything to do with Doctor Who. I read Douglas Adams at an early age, and Pam Ayres, which my mother would occasionally read to me. And I tried reading Watership Down, but as ever, was put off by the nonsensical idea of rabbits talking.

By the time I was a teenager, I’d read anything. My favourite writer became Franz Kafka and I became obsessed with the idea of existentialism, as you do when you’re young and you can’t get a date. Camus and Borges became, in my mind, my personal friends, and Gabriel Garcia Marquez was the weird uncle. I even liked Will Self, who was kind of like my successful older brother. I was the only teenager who held a party to celebrate finishing Marcel Proust, although no one came.

Reading brings me a weird sense of joy, every time I open a book, wondering where the author, in coordination with my imagination, will take me. I did a degree in English Literature and this almost put me off reading for life, what with all that Dickens and Shakespeare, but it did introduce me to the poetry of Frank O’Hara, 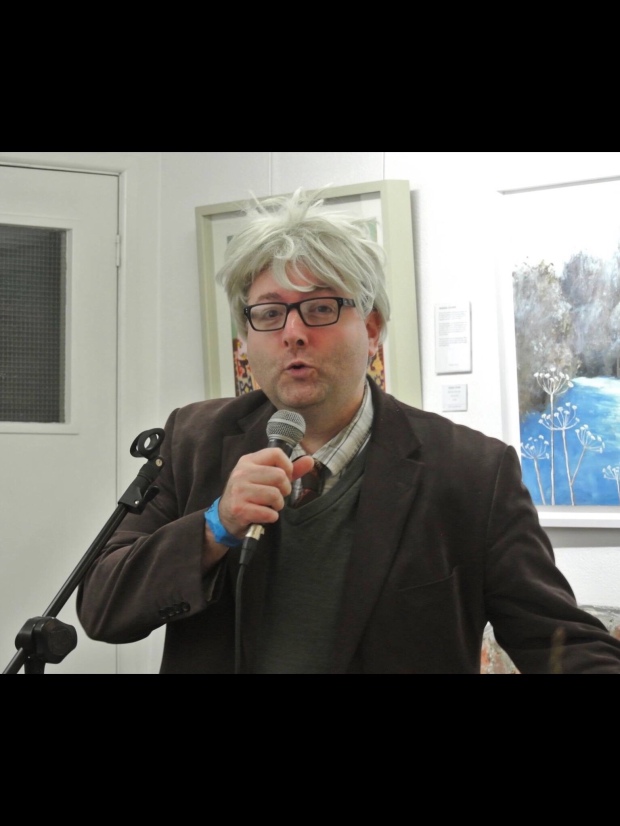 who has become one of my favourite poets. And now I’m older, I read for recreation. Haruki Murakami takes me to some very strange places, David Mitchell, Geoff Dyer, David Sedaris. Reading has been with me all of my life and I don’t think I would ever be without it.

I think it was Oscar Wilde who first said, ‘If you go to the supermarket when you’re hungry, you’ll end up buying more’. As ever, Wilde cuts right to the truth of the matter, and its always been the same for me, particularly with books. I go weeks without buying any books, and then have a sudden splurdge.

When I buy a book I’m buying in to the idea of reading it in the most heavenly circumstances. Bright summer light streaming in through the window, a feeling of absolute contentment, and the book being so well written and engaging that life itself becomes a transcendental bliss, a quiet hum for the senses.

When I was studying for university and then postgrad, I read because I had to read, and I read an awful lot, and a lot of that was awful. I still have a library of academic tomes on how to run museums and the correct procedures for hanging a painting. By the time I finished my degree and my dissertation, I felt that I didn’t want to read, ever again. Reading became a chore, and I would read for three hours a day, before work, after work, and at spare moments while I was at work.

It’s taken a good four or five years to realise that reading can be done for fun. I didn’t realise I needed glasses until just as my degree was finishing, reading was giving me headaches and I went to the doctor and he sent me to the opticians. The words would dance and move around on the page, the letters would cram themselves up to the letters next to them, and it would take me three attempts to read a sentence, sometimes. And then I’d no longer comprehend the sentence because I was too busy working out what the words and letters were. This was particularly evident during the time that I read Finnegan’s Wake.

I’m reading now for pleasure. There are certain books which I’ve been reading for research, mostly books by spoken word artists and comedians, or books about poetic theory or comedy theory, but now I’m reading for pleasure. I luxuriate in sentences and I take my time to read a book in complete relaxation. In such a way I have began to really appreciate again the form of the novel. I have also been rediscovering books I’d previously read, such as those by Haruki Murakami, Graham Greene, Edmund White, the short stories of Dorothy Parker. I’m just about to start rereading Angela Carter.

Because of this, I’ve started getting excitable around bookshops again. How lovingly do I run my fingers over the covers of random paperbacks, imagining taking them home and reading them. I have fondled many a bestseller. Naturally, a hectic life ensures that the actual act of reading can never live up to this ideal, but it’s like buying a dream. Some time over the next day or so I shall be finishing Graham Greene’s Our Man In Havana, a book I have enjoyed even if one does turn a blind eye to the casual 1950s racism. His spare sentences and use of dialogue are among the best.

So the point of this blog is to reaffirm that I have reaffirmed my love of the literary novel and reading as a pastime.