I’ve been to the Edinburgh Fringe four times now. Each time was great and I’ve made a lot of friends. The first two times I went was merely to watch stuff, and the last two times was as a performer. The city and the whole event are maddeningly beautiful, insanely vibrant, the people are nice, the weather is mostly bearable. But the highlights each time for me have been the various places I’ve stayed. Year One.

I went up with friends. There were six of us. We decided to flat share and we managed to find the most magnificent flat in a converted school down by the Water of Leith not far from the book festival site. We each had our own bedroom and the place had obviously just been converted into flats, the whole place felt new. Admittedly, it was a bit of a stroll to get to the old town.
But the most interesting thing about the place was the upstairs door. There were six bedrooms, one bathroom, but eight doors. One day I decided to see what was behind this door and I was intrigued to find a staircase going down. The staircase was carpeted and decorated and seemed to go on, down and down, twisting and turning throughout the bowels of the old school. Finally I came to the very last turn and the staircase just stopped. There was a wall. The staircase went absolutely nowhere.
Year Two

The second year was a cracker. I went up with the same people and again we hired a flat. This time it was in the new town area, a fantastic tenement building looking out over the street to a church.
For a start, again we all had a bedroom. Yet the place had seen better days. The floor in every room sloped down so that all the furniture was at an angle, and the fridge freezer looked like it might topple over at any moment. I was too afraid to use my wardrobe. It had a beautiful internal staircase which wound around the outside walls, the kind of staircase that one could easily make a good entrance on in an old black and white film. And most intriguingly of all, the seventy year old landlady turned up on the first day so that she could show us her wedding dress.
Which was somewhat bizarre. No towels, but we saw her wedding dress.
She warned us not to open the door upstairs at the back, and that it was off bounds. With that, she took her wedding dress and left us at it.
Naturally, the moment she had gone we opened the forbidden door only to discover that the room inside, which had once been another bedroom, had no roof. No ceiling, no roof. Just the leaden grey Edinburgh sky.
Year Three

Oh dear. My first visit to Edinburgh as a performer was with a colleague and we decided it would be much cheaper to camp. We found a lovely campsite at Morton Hall to the south of the city, about forty minutes by bus. Yet this was my first camping trip since 1984 when I was ten.
We arrived at ten in the evening after a twelve hour train ride and then a fraught taxi, only to have to put up the tent. I remember feeling very miserable but willing to make light of the matter, only for me to accidentally break the zip of the tent once it was up. You can imagine how bad this made me feel. And then to be woken at two in the morning by the intense cold, a cold unlike any other I’ve ever experienced, all the time wondering if that room with the missing roof was still vacant.
When I told all my friends, they laughed heartily.
Year Four

And so to this year. Once again I decided to flat share, yet this time it was with a website who paired me with four other people in student accommodation. Thankfully, the building was brand new and right in the city centre on the Meadows, and everything was shiny and modern, clean, efficient. We had a room each as well as a lovely living room and kitchen which looked as if they were sets from Star Trek. 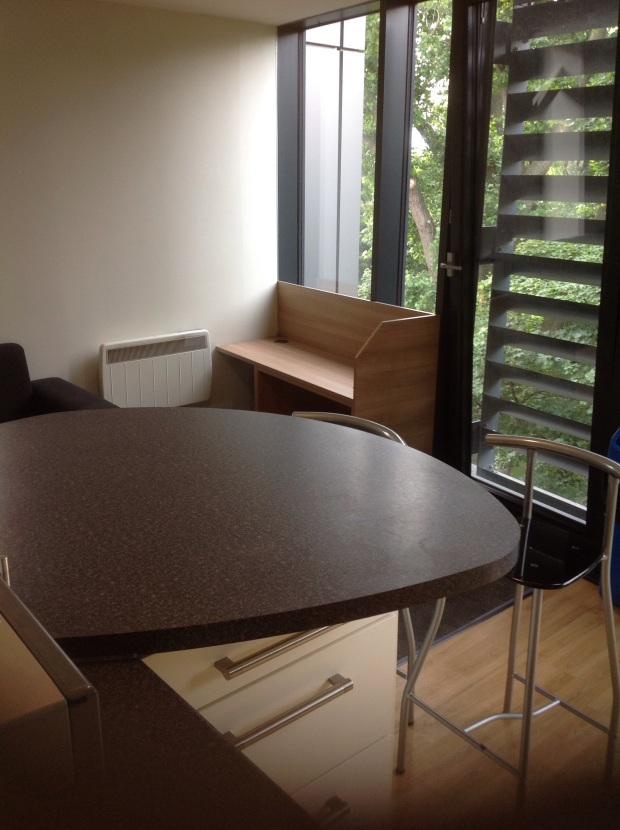 Only . . . there was only me there. Or at least, that’s how it felt. I never saw another person, and if they had snuck in, then they were very quiet. I had six rooms all to myself, in the middle of Edinburgh, during festival season!
But were there other people? There were subtle clues. One day, I found a Sainsbury’s carrier bag in the fridge. And another day, a floater in the toilet. Neither of them were mine. Ostensibly, I was alone in my own flat.
Or was I the mystery one, who my flat mates never saw, and pondered over?
So yes, Edinburgh is a place full of memories for me, and I’m really looking forward to seeing what kind of accommodation I have next year!

The Maori log drummers kept me awake last night. I mean, they might not have been Maori log drummers, but that’s what they sounded like. Womad does strange things to you. Yesterday, as I was walking through the campsite, I thought I heard a new Tibetan wind instrument made from yak’s horns and twigs belting out some kind of rhythmic shamanic hymn to life itself. Only it turned out to be some bloke pumping up his inflatable bed.
I think I’ve gone native. This morning, I almost went to tai chi. Instead I went to a tea shack. The pelting rain hammered on the canvas roof. I was surrounded by tea lights, lanterns, rugs, shabby chic tables and chairs. The radio was playing Leonard Cohen. I pondered on what a death trap the place might be if the tea lights got too close to the Mongolian fabrics draped in each corner.
I knew nothing of Womad before I came, except they it sounded like Gonad. And how incredibly grateful I was to be asked. For the last three days I’ve spent time with some of the finest performance poets in the country. Vanessa Kisuule, Matt Harvey, Scott Tyrrell, Chris Redmond, Jonny Fluffypunk. I arrived with Lucy Lepchani and we immediately ran into difficulty trying to erect her tent. Mr Fluffypunk came over, took one look, hammered a few tent pegs, and the whole thing looked much better. That’s the spirit of camaraderie in the poetry camp.
The poetry tent is listed last in some of the Womad promotional material. And my name is listed last in the poetry tent promotional material. Every morning, when it walk into the main arena area of the festival and see the massive stages and the tents and the flags and the stalls I think to myself, ‘I am the lowest ranking performer here. And it feels great!’ There’s probably far less pressure than being the headliner.
Yesterday’s poetry headliner was MC Dizraeli. He’s someone I wanted to see for a long time since listening to him on a cd about ten years ago. And the highlight of my festival so far has to be that he performed his hour long set in front of a crowd of about three hundred people while sitting on MY camping chair. In fact, as I type this, I’m sitting in it right now. It’s a story to tell my grandchildren. If I hadn’t brought the camping chair with me, then MC Dizraeli would have had to stand.
I’ve spent every day so far in the poetry tent, watching the performers. My own sets have been well acclaimed, and I’ve been stopped by several people who have seen me perform and liked it. That’s what makes a difference to a performer, the knowledge that someone has been touched, no matter how briefly. It was sunny yesterday and we performed outside in the ‘arboretum’. They laughed in all the right places and I felt that I could have taken on the world!
It’s raining again today. I’m not going to be wearing a jacket and tie, like the last couple of days. I shouldn’t have worn cream colored trousers, that mud is just not going to come out. The Wellington boots are just about the best thing ive bought in ages. I was watching Bellowhead the other day, they were performing on the main stage, but all I could think was, ‘I’m so glad I bought these Wellington boots’. When I get back to the real world later on, I probably won’t wear them until the next festival. But right now they are everything. Mainly because my sneakers are buggered after all that rain the day before yesterday.