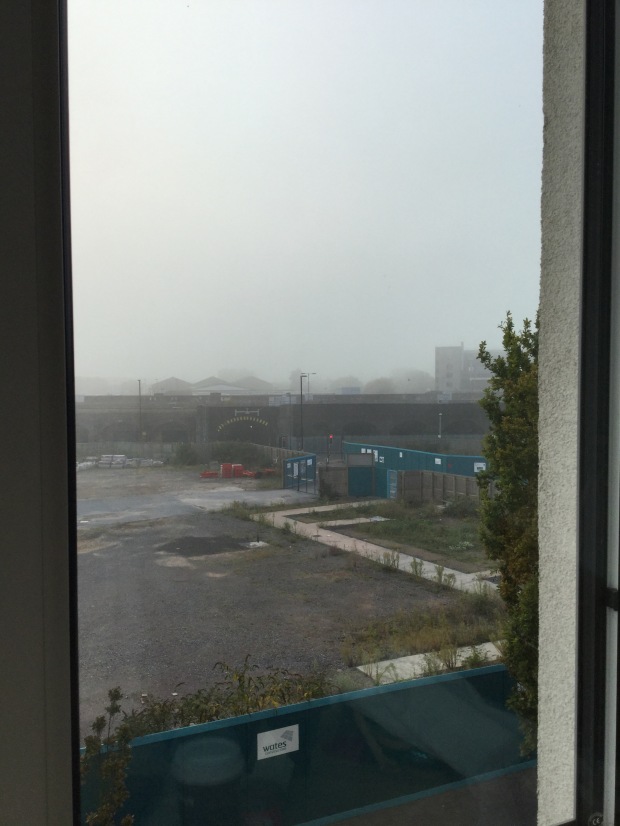 Before the gig:
At this precise moment I’m on a train and I’m going to a gig in Bristol. Indeed it’s quite an honour to be doing this gig because it’s a fundraiser for Poetry Can, an organisation I rather like, and it’s part of the Bristol Poetry Festival, and I’m one of two main guests. I thought I’d write this blog to tell you exactly how I feel.

The answer is mega nervous. My mind keeps running over the small things that can go wrong. And then it runs over the big things. The main concern at the moment is ‘will I be crap’? I know that the organisers have asked me because they like my stuff, and also because I’m cheap and available. But what if tonight’s the night where it all falls apart like a cheap microwave lasagne? What if I’m so preoccupied with other things that I don’t have my mind on it and I seem withdrawn and distracted? What if tonight’s the night that something really bad happens in the news and no one cares about my own particular brand of whimsy?

Just writing this adds to the nerves!
And what about the other things. Will nobody turn up? Will I not make it to the venue? Will I spill my drink over someone important? Will I get drunk for the first time since 1991 and upchuck over the first row during my performance? Will I have a sudden attack of the willies and run out of the room screaming? Will nobody laugh?
I’m already in costume, if you can call it a costume. I’ve got the glasses on and spiky hair, a nice jacket, some sensible shoes. I’ve got a card with me in which I’ve written the set and what I’m doing and in what order, and I’ve read it so much that it’s started to look a bit crumpled. Even so I keep having last minute jitters about the poems I’ve chosen. The set is a comfortable mix of old and new, funny and one deeply serious one which I’m worried people will laugh at. Maybe that might be a good thing.
I’m also listening to music. I listen to the bands who inspire performance rather than writing, so it’s Pet Shop Boys, Sparks, Erasure. The train has just passed through Tiverton and I’m wondering if I should turn the music off and concentrate.
It should be a good evening. In fact it probably will. But that doesn’t make me feel any better and part of me is wondering why I do this kind of thing at all. I’m sure it will all feel much better when I’m at the venue.
After the gig.
Yes, it went very well indeed. The audience was not huge but I knew a lot of people there. I was worried initially that they might not have appreciated my oeuvre. The open mic element of the night showed a bias towards weighty, traditional poetry, and the other co-headliner was Claire Williamson, a wonderful poet, deep and meaningful and totally human, she went down very well with the audience.

But there were plenty of friends there: Melanie Branton, for one, a poet with a similar sensibility to me yet much, much better. She did her poetry to huge acclaim, and that’s when I thought that they might like me after all.
There were a few young people in the front and a young man with a big bushy beard, I’d already singled him out to be the one I point to during the Beard Envy poem. He wandered off halfway through the evening and I felt a bit of a panic that I’d have nobody else to pick on. As luck would have it he came back just before my set, and he laughed and clapped all the way through, which made the whole night that much better for me. There was a big grin on his face, and afterwards he came and chatted and said how much he’d liked my set.
As ever I don’t know what it is I’d been worrying about. If anything I worry now that it’s done that I could have done more comedy poetry, as I did a couple of serious ones halfway through. I also wonder what the night had been like if the young people weren’t there, and whether the audience would have had the same dynamic. But it doesn’t matter: it was a good night, and I really enjoyed it, and the audience enjoyed it, and that seems to be the main thing. There’s no sense in overanalysing.
At this moment I’m in my hotel room in Bristol, looking out over wasteland towards the station, and the mist is hiding the sun and making everything monochrome. Life is certainly weird at times. Next week I have to do this all over again, the exact same set yet this time in London. No doubt the same old paranoia and nervousness will kick in once more!