Jason Disley’s new book Songs of Benevolence and Rage will be released very soon and I was very chuffed indeed to write the introduction for it.

I first came across Jason Disley over twenty years ago. His book, The New Beat Generation, was full of exciting poetry which spoke to me, as a young man interested in literature and the power of words. I shared his enthusiasm for jazz and the beat poets and I must have read the book about ten times, cover to cover. His was one of the first poetry books I ever read for pleasure.

Fast forward twenty years and for reasons which I’m still not quite sure about, I’d become a comedy spoken word artist and my work was invariably described as ‘poetry’. One day I received an email from someone, asking if they could perform at a night that I was organising at an art gallery, and I thought, hmmm, that name sound familiar. Jason Disley. Jason. Disley. And then it struck me, Jason Disley! The Jason Disley!

Meeting him was an absolute joy, and the years slipped away hearing him perform. Here he was, jazz poet, beat poet, doyen of the new Beat Generation. Did that mean that I, too, was now a part of the new beat generation? Was he Kerouac, was I Burroughs? I felt cool just replying to his email. Hey you kool kat, I wrote. And then I deleted it and wrote, Hello Jason Disley.

I’ve got to know Jason over the last couple of years and I was completely blown away when he asked me to write a foreword for his new collection. The poems are exactly as it says on the cover. Jason is a laid back performer, a lover of jazz, but these poems have an anger seething beneath, a social conscience and a deep concern for our world and its people. ‘Oh, pressure!’, he writes, ‘Explosions, anarchy in the ether’, in a poem titled ‘It Rajns When It Pours’. These are poems against tyranny, poems which howl, poems, indeed, of rage.

Jason’s love of jazz is evident in the ‘Poems of Benevolence’ section. ‘Its benevolence’, he writes, ‘Enveloping you in a sphere of hope that is like an overwhelming validation ‘. In this section he states that it is music that heals us me helps us, music that can set us fee, and a belief in the goodness of words and deeds.

This is a fantastic collection of heart and feeling, which leaves the reader genuinely uplifted. Jason finds joy in the world in spite of his rage, and, as he writes, ‘I do not look to the future, nor back in anger, I breathe the now’, which is as good a philosophy as any. It’s great to know that the spirit of the Beat poets, the jazz mystics, the dreamers and the believers, is still going strong in the work of Jason Disley. Luxuriate, dear reader, in this book, and let him take you to ethereal places. 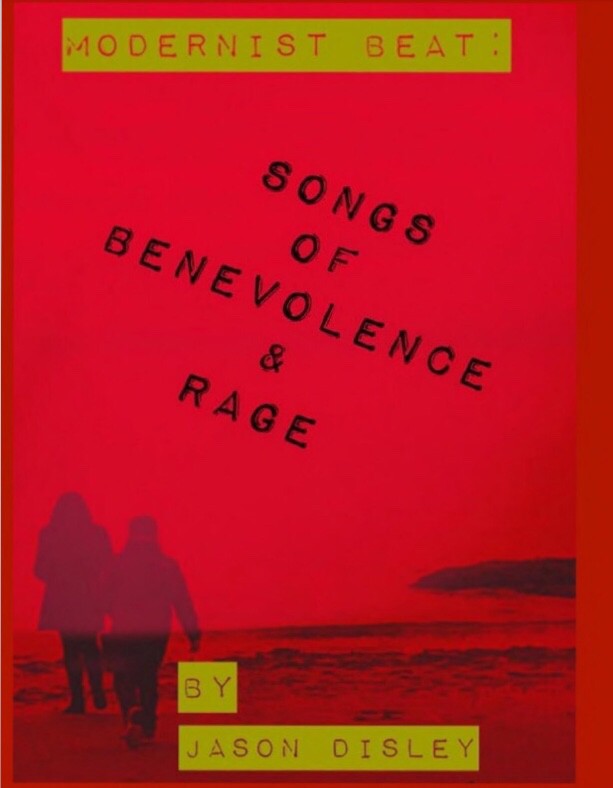