Last month I performed in New York and I had the pleasure of making the acquaintance of MargOH Channing. MargOH is a singer and comedian whose performances mix high camp and cabaret style singing with the seriousness of life itself, issues of identity and representation. We hit it off immediately, sharing a green room, though it must be noted that she finished all the Martini, and I had to help her down the stairs after a bit of a stumble on the second landing. MargOH is an engaging and almost tragic figure who has been very inspirational to me personally. I jumped at the chance to probe her in more detail in light of the recent presidential elections. 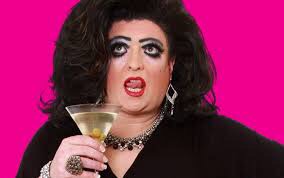 1- You come from a fishing community. How did you end up on the New York cabaret circuit?
Darling my road was long and winding. I came from a very broken family so I had to go out on my own at a very young age. I actually moved to NYC as a child to work at my Aunt’s bar where I was discovered by Russ Meyer and was cast in his film “Common Law Cabin” and the rest is history…I call my cabaret career winding down as I’ve done just about everything, even Liberace!

2- I’ve noted from your work that you like the occasional drink. How does alcohol affect your performance?

I don’t know how anyone can perform without it? Many years ago Elaine Stritch told me after I had a rough night at the Reno Sweeney. She said MargOH! “Stick to one before the show, one during and afterwards whose counting”. She came on a night when my panties fell off and I tripped and fell on Rex Reed, he was not happy as he picked pubes out of his teeth…well anyway its not like I gave him the clap!

Let me make a martini! People in this country are basically stupid! Reality TV has leaked into our news sources and everything is so sensationalized we can no longer tell the difference between fiction and reality any longer. Plus everyone is very nostalgic instead of looking to the future. The fact is people over 65 and their white kids vote for the old days when certain people knew their place. That is what got Trump elected. When we as a nation realize “Political Correctness” is progess then maybe we can elect visionaries instead of dusty old hacks…was that too harsh?
4- Your performances and incredibly funny, occasionally tender, and with excellent comic timing. Who are your influences?

I have so many influences but most of all Judy Garland is my muse, someone to aspire to be as a performer. When I started performing I wanted to be a celebrity, you know be loved, but that’s all wrong! As you get older you realize its about the work and sharing that connection with an audience. Judy did that better than anyone and I try to remember that everytime I walk out on stage, things may not be perfect but if you connect with just one person then it’s all good. I’m also a big fan of Totie Fields, Sandra Bernhard and downtown legend Penny Arcade.
5- What’s a perfect night, in the eyes of MargOh Channing?

Honestly, a good old dinner party with friends where someone ends up under the table or you wake up with someone in your bed and can’t remember a thing…Those are the moments I cherish…

6- There’s an underlying hint of personal tragedy in your act. Have times been hard?

Are you sure that’s not my Chanel #5? In the world of Social Media where everyone shares their good times, I like to mess with everyone and let them see the real me…I never met a happy comedian, have you?

7- When you’re putting a show together, what makes the perfect big opening?

As an audience member I do not like formula in a show, makes me feel they are taking the easy way out, challenge me please! Actually for the first time in my new show HUNG I open with a song, “You Go To My Head” . I’ve never done that before and do find it fun. In the past I’ve always opened with an overture or entrance song by my back up singers but since they all quit I had to change it up. The one thing I do always do is end with a ballad. Once, my musical director Tracy Stark asked me ‘Why do you always end with a sad song”? I replied, “I am a sad song.”
8- Do your family miss you, now that you’re a big star in the big city?

Of course, my sister Rita is always asking me to come back to Bangor to be her receptionist, she is a highly successful Opthalmologist! I never would have thought that was possible since she is cross-eyed but she is a trooper. My mother on the other hand is a bit of a problem so we shipped her off to a retirment home in Wasilla, Alaska. I thought it best Sarah Palin keep an eye on her or vice-versa…They come to shows when they can so we are all good!
9- What influences your writing?

The underdog is my inspiration for writing. Injustice and inequality drive me to do what I do. I never felt part of the party so I write about that. It’s not always being the belle of the ball, it’s how you trip the one that is in the nicest possible way to let them know they may deserve it but I’m not sure why because you seem wretched. Does that make sense?
10- What advice might you have for any young buck who would like to take up performing?

My best advice for an upcoming performer is something Burlesque Legend World Famous BOB said to me. “If you aren’t making yourself nervous or frightened every couple of weeks then you aren’t trying hard enough”. It was the best advice i was ever given and it’s so true. Do what you love to do and the audience will come, it may be harder and take much longer than you thought but when it happens you’ll know you stayed true to yourself and its magic. XOXO MargOH!