One of my best friends in the world of performance poetry is Tim King. He is a man of integrity and innovation, art and language, with a real sense of justice and an understanding of what it is which keeps us all going. His poetry is by turns personal and universal, exploring themes of loss, addiction and living. Some of his work is playful, with rules and strictures which he imposes on himself for the purposes of their composition. Some of his poems, also, are incredibly funny.

I first met Tim at a performance poetry workshop almost five years ago. Since then we have worked closely at venues all over the south west of England, appearing together at the Rest Festival in Salisbury, slams in Bristol and Cheltenham, and as part of a larger ensemble at festivals in both Barnstaple and Denbury.

We have also shared some crazy adventures getting to these events, most of which have been shared on this blog in months past.

Tim is a first class poet and performer and a wonderful human being. There’s also something very reassuring about his beard.

1. Hi Tim. It’s a simple question, but how did you get in to ‘performance poetry’?

Hello Robert. Thanks for breaking me in gently. I think it’s all to do with feeling I have stuff to say. I’m trying to discover what that stuff is and how best to say it, but of course it keeps changing. In the past I wrote songs and sung in bands, although I always deferred to the musicians in those situations so often the focus would slip. I had this idealistic notion that if we all worked together a certain synergy would occur and the end product would become more than the sum of it’s parts. In reality I found my ideas were routinely diluted. At that time I lacked the confidence, musicianship and persuasiveness to articulate myself adequately or the authority to impose my half-baked ideas on people who could do things I couldn’t do. Performance poetry seemed like a way to achieve roughly the same thing without having to worry about all the musical nonsense. Liv Torc got me started.

2. Your themes touch on issues which ought to concern everyone such as environmental matters and FGM. Should all poets or performers draw attention to such matters? Is it ok to be political?

I think it’s definitely okay to be political with a small ‘p’ – we’re social creatures and essentially society and politics are the same thing. That said, engaging from an explicitly party political perspective seems counter-productive. I don’t see the point in alienating folk before you’ve even started. I wouldn’t presume to say what other poets and performers should do, although I do think making work which reflects one’s own interests and enthusiasms is probably a good start. I feel passionately about the environment and the sexual abuse of children, so I make some of my work about those subjects. For me the whole point of performing is to connect in such a way that the audience realises I’m a person, just like them. Of course, everybody already knows this, it’s obvious… but there are levels of knowing. It’s about getting under the skin, exchanging a spark or doing whatever it takes to truly communicate the shared nature of our humanity – our oneness – if you will. To that extent, I think so long as it emanates from a real place all art is automatically political. It’s ultimately subversive, because accepting that all people are essentially the same makes it harder to countenance authoritarianism, inequity and cruelty.

3. Will you be doing more musical works in the future?

Yes and no. I’ll definitely be incorporating more musical ideas into my ‘act’ over the coming period but I’m not planning to do anything exclusively musical (e.g. a musical).

4. Who are your influences, both within poetry, and outside?

As a child I loved Spike Milligan, Edward Lear and Wilde’s Ballad of Reading Gaol. I also grew up entranced by 60’s pop music: the Beatles, the Kinks, the Small Faces, etcetera. I really like intimate, cosy, domestic seeming stuff that somehow speaks of underlying profundity. I like nonsense too.

As a teenager I was greatly influenced by gender-bending glam-rock minstrels Bolan and Bowie, although probably the biggest single impetus to my creativity came from the discovery of Kate Bush in the late 70’s.

I loved the way her work was so different from anything I’d encountered before. It opened the door to the possibility of not following the herd, not trying to be true to anything other than the little voice inside. She gave me the kick I needed to stop worrying about whether or not I was good enough and just get on with it. She touched me deeply and I love her to bits.

John Cooper-Clarke, John Hegley and Neil Innes all featured quite heavily in my adolescence and early adulthood, but it wasn’t until I went along to Taking the Mic in Exeter and saw Liv Torc host and perform in 2010 that I began to think seriously about doing something similar myself. Liv is great – totally outspoken, a brilliantly funny and original poet and very encouraging. She’s helped a lot of excellent poets in Devon on their way and now she’s doing similarly inspirational things in Somerset with Take Art and further afield with the Hip Yak Poetry Shack. I love Liv too – not to quite as many bits as Kate though. Kate gets the lion’s share of the bits and Liv gets more hugs. To be honest, I guess that’s more a matter of opportunity than anything else. I hope that doesn’t look bad? What was the question again?

5. Your work is unique and no two poems seem to adopt the same rules or format. Is constant reinvention important in any art form?

That’s an extremely kind thing to say. Thank you. With regard to rules and format, I’ve frequently read that, in design ‘form should follow function’. In art, I think form is much more an integral part of function. For me, working to rules is a really good way of tying up the analytical part of my mind just enough to let the subconscious stuff through. Left to free-run, I’d probably write pretty much in strict ballad form (I blame Wilde and 60’s pop music) which could quickly become quite boring. I’ve always enjoyed setting up alternative strictures and structures to avoid this. More recently I’ve found myself using more fractured forms – re-mixing predictable forms in unlikely ways, mashing poems together, shouting “CUT” periodically, that sort of thing. It’s pathetic really.

6. You have maintained the same performance image since I first met you, wearing the same type of shirt at each event. In such a way, you have a trademark style. How important is this to your performance?

I’m not sure it affects my performance at all. It is useful when I go places and people recognise me from the clothes. I may have to change the shirts soon, as the elbows are wearing a bit thin. I’m considering a complete change of style. When I can be bothered to find a ‘new look’ I’ll probably stick with it for a while. Recognisability is definitely helpful.

7. What are your plans for the following year?

I have a couple of one-man shows I’m working towards: one about growing up, called Significant Childhood Sexual Trauma and another about climate change (as part of the research I’m doing a two-month online climate-science course with Exeter Uni starting in January) – I guess these shows will be ready when they’re ready. I don’t really think in terms of years. In the more immediate future I’m planning to get out and about a lot more during the coming months, hopefully putting together a small nationwide tour of Open Mics for the Spring and Summer. I’m also going to anthologise my chap-books into one mega-chap-book so I have something to sell on the tour which hasn’t been booked yet and I need to sort out my online presence. There may be some musical collaborations in the offing too. It’s possible I’ll need a life coach.

8. As a co-host of a performance night, what advice would you give to anyone who would like to get started as a performance poet?

9. Which work of yours are you proudest of?

Back in 2013 I put together a show with a brilliant singer/songwriter called Rebecca Maze and fellow poets James Turner and Morwenna Griffiths. We did three performances of Returning the Dark Stare in three separate venues in Torquay and Exeter. People cried and laughed and felt transformed and said wonderful, wonderful things about the evening. Could that be my single proudest achievement to date? I don’t know. I’m not terribly susceptible to pride. Being one of the performers chosen for the first WOMAD Poetry stage in 2013 was pretty cool (as was being invited back for more in 2014) and working closely with Chris Redmond and client’s of MIND as part of Take Art’s ”The Thing Is…’ workshop project was another highlight. Running Taking the Mic with Morwenna for the past three years has been a joy. Watching people develop. Making friends. I dunno. For now I’m just having a ball. Mainly I feel gratitude. I know I haven’t really answered the question, but I promise I’ll be sure to let you know when I feel properly proud of something! http://iamnotasilentpoet.wordpress.com/tag/tim-king/

Thanks so much, Tim! 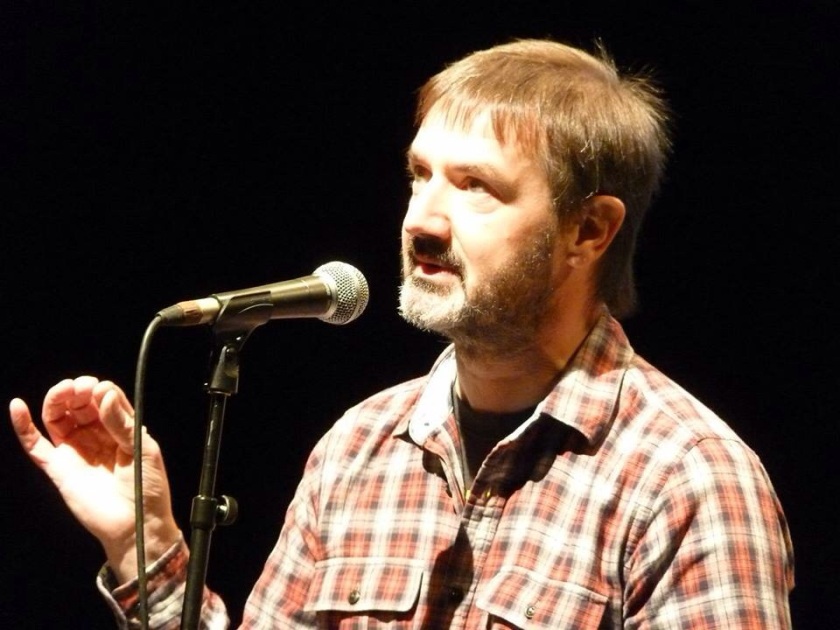