I went along to Cheltenham and took part in the qualifying event for the main All Star Slam. It was a useful exercise, if nothing else. I certainly learned a lot and came away with lots of inspiration for next year.

There was a rumour, whenever I mentioned the slam, that it is always won by someone from Cheltenham. So the idea persisted before the start that perhaps I should freely publicise the fact that the former mayor of Cheltenham, and current leader of the local Conservatives group, is also called Robert Garnham. (This is true. Check it online). I decided that this might be a tactical error.

I’d already changed the poem that I was going to do in the qualifier. I’d hoped to start with The First Time, with its raunchy content and sexual comedy, but I’d heard from various people that the audience, who judge at this slam, were very conservative, (with a small c). For this reason I decided to start with The Straight Poem, which I thought they may find wryly amusing.

You know what will happen, I kept telling myself. I will get called to go on first. And then people won’t know what to make of me. And I shall fall by the wayside.

I attended the event with Tim King and Morwenna Griffiths. We were all good enough to qualify, I reckoned. We arrived at the venue and the audience were asked if they’d ever been to a slam before. Most of them said no. Well, I thought to myself. Whoever goes on first will lose out, because the audience won’t know what to expect. If they’ve never been to a slam or seen performance poetry, then they won’t know if the first person is good or bad. And their scoring will therefore be indifferent. Unless, of course, there’s a warm up a couple of poems beforehand for the audience to understand just what they are watching.

In quick succession, two things occurred. The first was that there was no warm up. The second was that I was picked to go first! Ignoring my reservations, I belted out The Straight Poem to the best of my abilities.

It was well received, seemingly. Tim King’s Big Pig poem was similarly enjoyed. And Morwenna brought the house down with her Black County Dialect poem. It’s going to be close, I told myself. Tim and Morwenna are probably definitely through. And I might be, too. However, I might lose marks just by being on first.

Indeed, Morwenna did go through. Like a poetry gazelle, she leapt into the All Star Slam. Tim and I were beaten by some people from Cheltenham.

We reconvened a couple of hours later to support Morwenna. We even came up with a chant: MorWinner! MorWinner!

She was beaten in the first round by some people from Cheltenham. 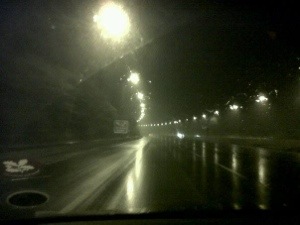 Then we had to drive back to Exeter in the pouring rain . . .