It’s been a very unusual but enjoyable week performing in two completely different towns to two completely different audiences. In Bath I performed to the students of Bath Spa University and I was the oldest person in the room, though I did get mistaken for being a 22 year old, and I did cause consternation at the bar by asking for a cup of tea. They made one for me in the manager’s office, and then they didn’t know how much to charge for it. Bless.

And then the next night in Okehampton I was the youngest person in the room by some considerable margin. It was in an inn on the edge of Dartmoor, miles from the town itself, surrounded by bric a brac and paraphernalia, the gig itself take place in a room decked out to look like a galleon. The audience wasn’t very big, but when some younger tourists from Sweden turned up, the manager of the inn informed them that watching my set was compulsory!

I did similar material on both nights and it went very well. Yet my overriding memory of the two days was the travelling. If I have to get on another rail replacement coach again then someone’s going to get nutted,

I was very impressed with the students at Bath Spa. Samantha Boarer has long been a favourite poet of mine, and she is now seen as an elder statesman among the younger students. Those who performed were individuals, humans, with genuine concerns, humour and rhythm, surrealism and genuine literary talent. There was a really supportive atmosphere which I was incredibly glad to be a part of.

And it was great the next night to spend some time with Jackie Juno, one of the people who inspired my poetry career. Endlessly funny, inventive and real.

There’s so much talent in this area and it makes me proud to visit other parts of the country and see just how individual and buzzing the Devon / South West scene is. 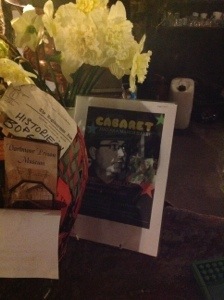