What did I learn from my two and half days at the Edinburgh Fringe?
Unlike my friend Mark, who’s bald, Edinburgh Festival has a humdinger of a fringe. Every year I go along and every year I’m astounded not only by the variety and the general craziness of the place, with every nook and cranny turned into a performance area, and every footpath filled with flyers, barkers, publicists, posters and people, but also by the intense hard work put in by those who have shows there.
I was in a show this week. It wasn’t my show. I was a guest in someone else’s, and that kind of meant that I didn’t have to do any flyering. The guilt I felt at not doing this seemingly simple chore was far outweighed by the relief that I didn’t have to spend all morning standing in the Royal Mile speaking to complete strangers, or leafleting similar shows, and talking, talking, talking about it.
You see, that seems to be the knack. If you can summerise your show in just three or four words, then you can save your breath and get everything out as the tourist walks straight past. ‘Its a show about a man who realizes halfway through his driving lesson that the whole world is counterfeit and that he is just a figment of the imagination of a dog owned by his brother in law’, won’t do. Better to say, ‘Imaginary dog show with fart jokes’.
I went along to a few shows and three in particular stood out, not only because of their subject matter, but also because of the work put into them to promote and engage with the audience. AJ McKenna’s Howl of the Bantee affected me deeply, it really is one of those shows which changes the way you think. Excellent performed, thought provoking, incredibly well-written, I could not fault it. The only problem seems to be that it has been put in a venue a little outside of the city centre in the new town area. The show is timely, honest, angry, looking at the media portrayal of transgender issues and the dangerous labeling of anti-trans thought as ‘banter’. You will learn something from this show.
The second show which affected me was Dominic Berry’s Up Your Game : The Downfall of a Noob. A comedy / music / poetry show about Dominic’s self realization through gaming and computer games, I was hooked throughout due to the humor, the energy, the storyline and the promise that Dominic might get his kit off. (Actually, I only discovered the nude part of the show afterwards, and it just happened to be the night I came that Dominic had decided to drop that element from his show). Funny, philosophical, wise and sexy, the show spoke to me and stayed in my head for days afterwards.
There are other good shows, too, of course, in the spoken word bracket. Rob Auton’s Water Show is a highly polished, funny, thoughtful piece, as you would expect from a performer for whom I have the most incredibly respect. Tina Sederholm’s show is mighty, thoughtful and incredibly well put together. I’m so totally in awe of her performance style and general oeuvre, and I’m glad that it was she who was crowned Swindon Poetry Slam Champion all those years ago beating me in the final! She oozes talent and class.
I came back too soon. I’m so glad that I went along. I really don’t think I could manage the whole three weeks, unless I were financially secure and had help from others. It’s this help which seems to be a part of the spoken word community at the fringe, with all the poets and performers seemingly sticking together and helping each other out. I spent a very fine afternoon in the bar with Matt Pernash, aka Monkey Poet, chatting and laughing, drinking and writing silly poems, drinking and listening to music, drinking and chatting about all kinds of stuff, and drinking. Indeed, the highlight of the fringe for me was persuading him to perform the outside of a crisp packet. Actually, he didn’t need much persuasion. I could have spent the day just listening to him talking about his poetry adventures!
So, what did I learn from the fringe? That it’s the hard working poets who seem to achieve the most success. Which, I suppose, is a way of telling myself that if I want to go next year, I’d better start working on it now! 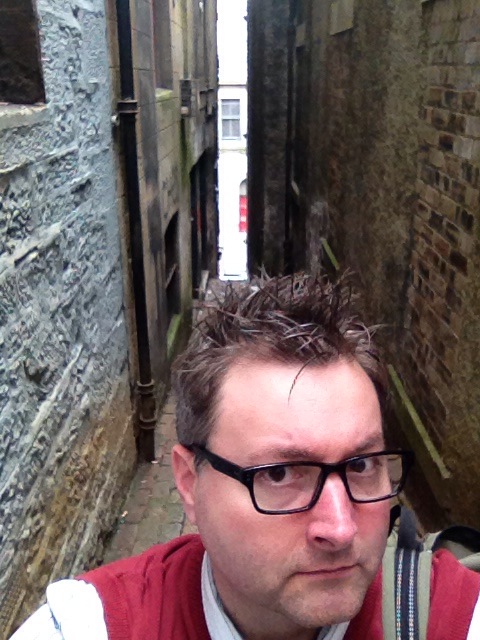